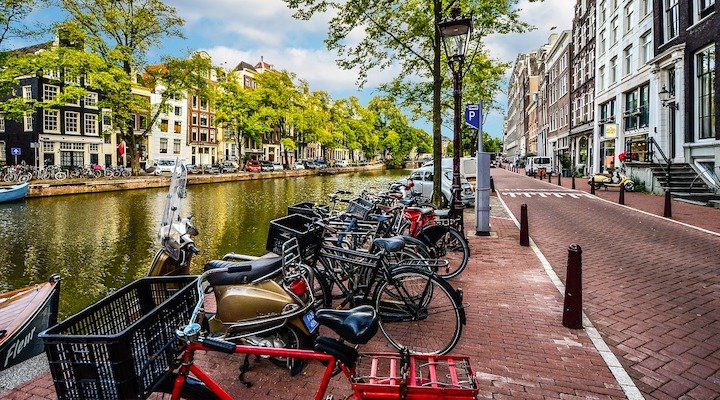 You’ve booked a city break to Amsterdam for the weekend, so grab a bicycle, head to a coffee shop for a lounge and a space cake, then end the night sauntering down the infamous Red-light district for fun frolics. Amsterdam is a city with much more depth, with obvious contrasts and within an abundance of charm.

The city is full to the brim with wide, paved streets set next to glimmering canals and houseboats. The tall buildings stand to a halt, yet look ever-so-slightly tilted towards the cobbled streets. The benevolent atmosphere transcends the fresh Amsterdam air, with the locals traditionally greeting with three kisses, and ultimately creating a magical city, patiently waiting to be explored.

Being immersed fully into the relaxed culture is absolutely infectious and a must when visiting. The calm way of living is prolific and truly denotes Amsterdam’s positive vibes. A lack of traffic around the city could be a main factor into its relaxed atmosphere; with the most favourable way of transport for many Amsterdammers being bicycles. This is not surprising, considering it’s one of the most bike-friendly cities in the world, with most streets possessing dedicated cycle lanes. Pedestrians, make sure to listen out for the gentle sound of bicycle bells when stepping out onto a road. 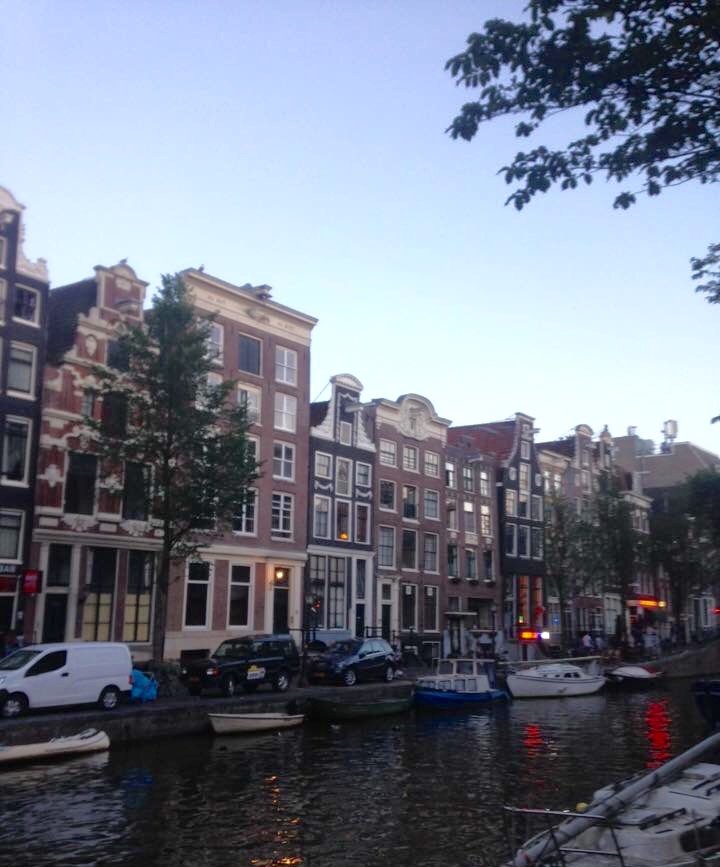 A picturesque view. Amsterdam has over 165 canals and over 1,200 bridges. Not a surprise then, that the most photographed spots for curious tourists are along the peaceful canals next to the a row of adorable bicycles. Venturing around the canals truly does feel like a scintillating maze and exploring through them becomes a fun pastime. The waterways are certainly emblematic to the city.

When in Amsterdam, the first food thought should be ‘kroket’. This is a deep fried roll with meat ragout or potato inside, covered in delicious breadcrumbs – an Amsterdam necessity when it comes to snacking and can be found in almost every food outlet. Consider grabbing one whilst strolling around the cobbled streets of the Red-light district – truly scrumptious even on the go.

The Red-light district is inexplicably one of the Amsterdam’s biggest hotspots for both tourists and locals. An area famous for its very legal sexual-activities and adventures. Just make sure not to take pictures of the women behind the windows, they are certainly not afraid of dishing out verbally abuse for it. Many people are unaware of the difference in colours of the lights behind the windows where the girls provocatively stand. If it is blue, she was not born a woman, a handy tip for tourists.

Visitors can easily venture into one of the many sex shops for a browse or simply watch a ‘peep show’ for just a Euro; standing in a little booth whilst the half naked woman rolls around a bed for her viewers is certainly a memorable experience for everyone, before heading for a night of fun with friends.

A budding gay scene is also present within the city, with large sets of cutting-edge gay bars located in the city centre. The main street, Reguliersdwarsstraat, is home to popular bars including Taboo and Club Nyx – where there is sure to be a sing-along to a RuPaul classic with a dashing bartender. For those visiting in August, enjoy the Gay Pride that is famous around the world, with one of the most picturesque parades that happens along the beautiful canals. 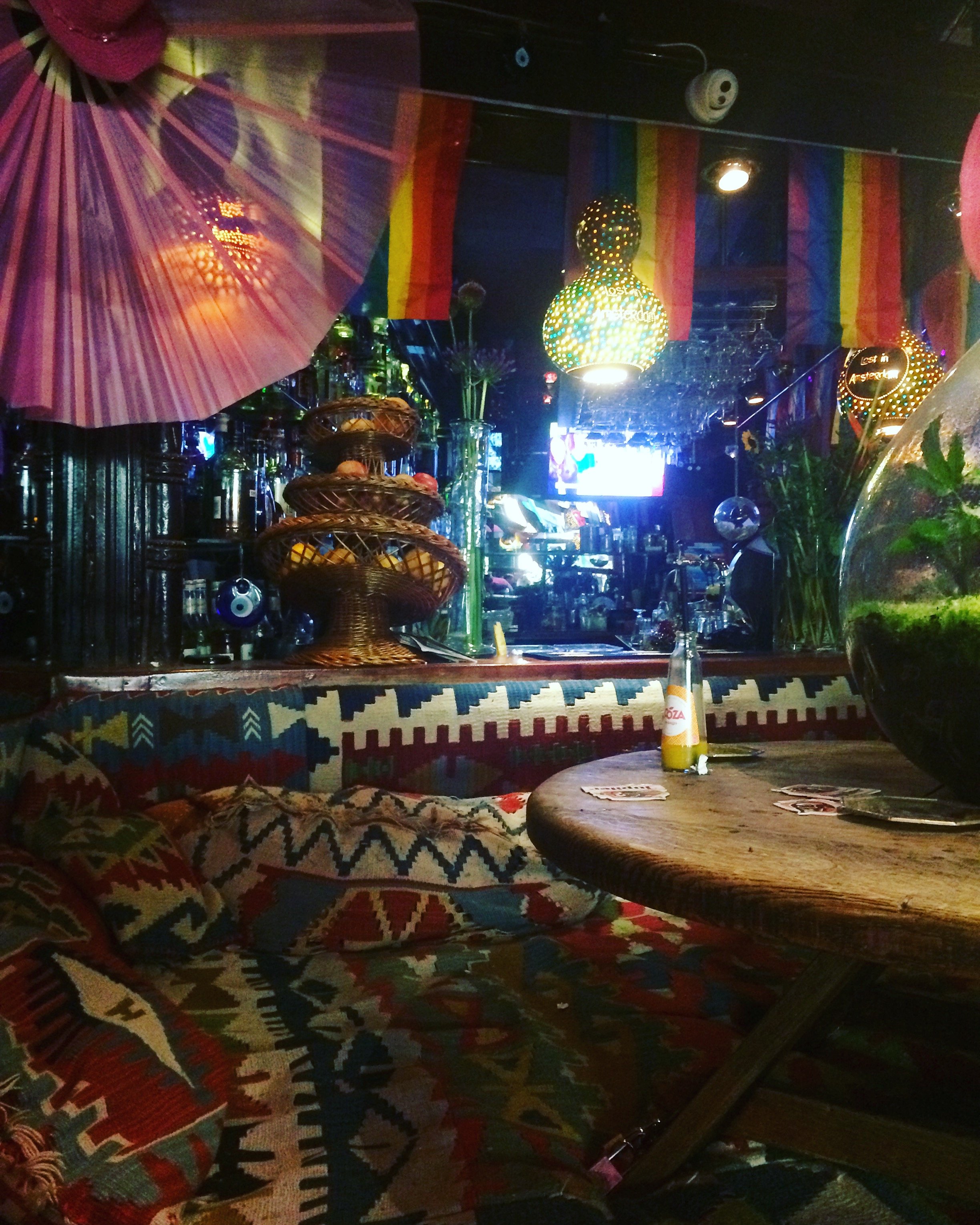 A visit to a coffee shop in Amsterdam to try a space cake should be a fundamental activity for visitors to truly experience the carefree, Dutch culture. These feature rooms as dark as nightclubs, all filled with the comfiest of sofas, spread around the chilled room. After relaxing in a chosen spot, a menu by a friendly Amsterdammer, provides a choice of scrumptious flavoured cakes; with the added high of marijuana.

Another legal high available in the city are magic truffles. Exploring any street in the city to find many neon-lit shops, excessively filled with quirky accessories and sickly-sweet chewing gums and every flavoured Fanta, these will stock the legal drug. Magic truffles range in strength and provide psychedelic experiences that include vivid, visual effects and colours and also create philosophical ways of thinking; and also infectious giggles.

Kristian Brennan is a writer based in Manchester.

View all posts by Kristian Brennan →