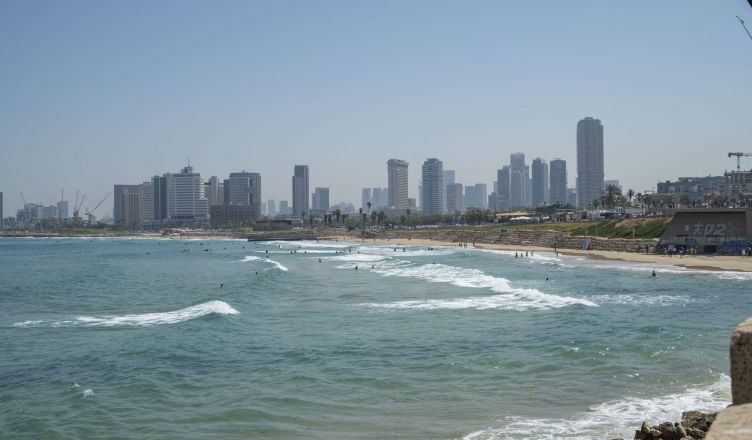 Drew Wilby
Drew Wilby is a photographer and graphic designer living in Manchester.

With flights leaving from Heathrow, Luton, Gatwick and Manchester, all throughout the week, you’ll have no problem travelling over to Israel. The flights take around five hours, and with a time difference of only two hours ahead, you won’t feel the jet lag at all!

Return flights can vary in price from between £200 and £400 – depending on flight operator and also time of travel – so always check online for the best price from your favourite airport.

When arriving into Ben Gurion International Airport and stepping off the plane, you’ll be greeted by a lovely summer heat of between 24 and 30 degrees. If you want to visit in the winter months, temperatures will be on average between 9 and 17 degrees. Still not bad, but I’d suggest the summer sun is way better for us Brits.

Getting from the airport to the city of Tel Aviv couldn’t be easier. There are direct trains to and from the airport which depart from Terminal 3, Gate 3. Tickets can be purchased from the automated machines or from the tellers at the entrance to the station. (More info can also be found by visiting rail.co.il for trains and bus.co.il for buses.)

Obviously, anyone wanting a taxi can go straight from arrivals on the ground floor and jump right into a cab! The drive to the centre of Tel Aviv takes just under 30 minutes.

I stayed at the Brown Brut. The rooms there are clean, tidy and modern with essential amenities you need all provided – but most excitingly, the Brut had been announced as the Official Gay Hotel for Tel Aviv Pride Week 2022.

The newly renovated boutique hotel sits right on the main promenade of the city, within easy access of all the surrounding areas, including the beaches to the north, the shops and bars to the east, the Old Town (Old Jaffa) to the south, and not forgetting the stunning blue waters and amber sunset views to the west.

Rooms in the hotel can range between £130 for a standard room (2 people, 1 night) to £340 for an Executive Suite (2 people, 1 night). Booking via their official website does state ‘Official Website: Best Rate Guarantee’, so always look around first and get in touch with them if you find cheaper elsewhere!

Old Jaffa, a picturesque Instagram dream, is overflowing with history, architecture, galleries and much more, so spending a few hours to a day here will be very easy to do.

If you’re looking for a unique, one-of-a-kind bargain, then you will have to head over to the flea market. With traders selling everything from rugs to spices, you will have a hard time deciding where to turn your head.

Top tip: If you see rugs laid out on the road or path, don’t avoid them: WALK OVER THEM! The sellers put them on the road for a reason. They want people to walk over them as it strengthens the fabric and fibres, and also ages it slightly, which adds value to the rug.

One of the main reasons to visit Tel Aviv is its world-famous Pride Week,0 which was held this year on 10-17 June 2022.

Attended by over 170,000 participants, the feel and the atmosphere were incredible. Unlike pride parades in the UK, where spectators line the streets and watch the floats go by, Tel Aviv actively encourages everyone to walk in the parade – with the floats blasting beats and people dancing their way down the route to the massive main park where several stages are located.

This year (for the first year ever) the route started at Sportech Park, along Rokach Boulevard to Ganey Yehoshua Park. This differs from previous years as the route has always been along the main street next to the beaches, but due to construction works, the location had to change this year. Whether or not the route will be moved back or stay where it is for next year is still unknown.

RELATED ARTICLE  #FreePalestine - one side of a debate

Top tip: The parade route is just over two miles! If you do decide to walk in the parade, due to the sheer volume of people and the floats, walking two miles could take up to two hours, so make sure you lotion up and take plenty of water too. Disabled visitors should prepare for the long walk accordingly.

If you still want a great LGBTQIA+ atmosphere but with a more relaxed atmosphere (not to forgetting the sun, sea and sand),  then the Hilton Beach is the place to be. This beach was named as the official Pride Beach this year and was decorated with pride flags lining the whole place from shore to sea!

You’re able to just walk up and grab a lounger and a parasol as you wish (if there is a spare one) and stay there for as long as you like. There is a bar for food and drink, but you’re allowed take your own too.

Swimming in the sea is just as warm as staying in the sun due to the shallow depths and small waves. And much like every beach in Tel Aviv, it has an amazing view of the sunset over the ocean, so enjoying these views with a drink in hand is a perfect way to end any day.

And what happens after the end of the day? The start of the night of course! One place that always has a thriving bar and club scene is the gay bar Shpagat, situated on Nahalat Binyamin St 43.

The first night of pride, the street was closed off and opened up to the celebrating community. It didn’t take long for the street to fill up fast with the sounds and sights of an amazing all-night party.

Drinks prices vary depending on what’s ordered. A vodka lemonade costs around £14 and while it might be seen as a bit on the high side, there were no 25ml or 50ml measures in sight!

And of course (once the hangover has depleted) a trip to Israel wouldn’t be complete without visiting the Holy City of Jerusalem. With around 3000 years of history, and home to three monotheistic faiths, Jerusalem is a vast city intertwined with busy shops, glorious architecture and plenty of history.

We entered the city using the Jaffa Gate, which is one of its main ancient gates, and made our way onto the Old City Ramparts Walk. There are two routes to pick from: the Northern Route and the Southern Route. Please be aware that steps are high and steep, so may not be the best choice of anyone with accessibility issues, but I can promise that the remarkable vista over the city and the Jordanian mountains from the Old City Wall is well worth it.

After the walk along the Old Wall, we made our way down to the Western Wall, also known as the Wailing Wall. This is a section of a much larger retaining wall which encloses Temple Mount, the religious site not accessible to most people.

Standing at 19 meters high and stretching 57 metres across, the Western Wall is a religious symbol known to all within Israel, but even if you are not religious (like me) you can still mark the special moment by placing a prayer or note into the wall itself. This can be a wish or prayer for yourself, or even a note to a loved one not with us.

Whatever you may write on the paper, just fold it up and push it into the cracks of the Wall. This moment truly felt special and I urge anyone visiting Israel to do this, as it really did touch my heart and bring a tear to my eye.

My trip to Tel Aviv and Jerusalem in scorching Israel was equal parts relaxing, exciting and spiritual too.

Anyone who books a trip there will not be disappointed by the number of varying activities that you can get up to.

For more info, visit goisrael.com or check out #VisitIsrael on social media.

To see more of Drew’s photos from Israel, visit his Instagram here and here.

Drew Wilby is a photographer and graphic designer living in Manchester.

View all posts by Drew Wilby →