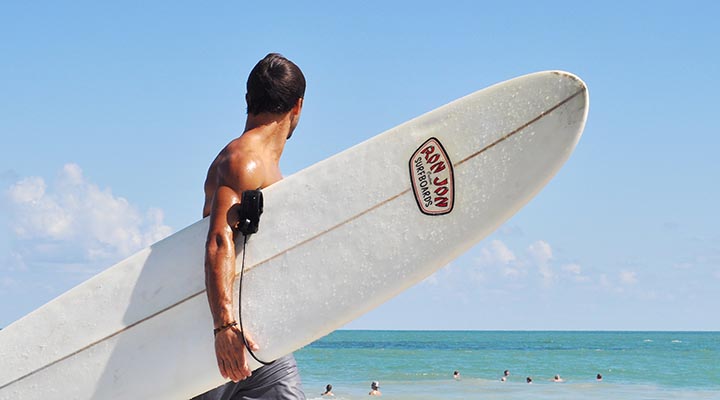 St. Pete is a gem. Beyond the palm trees and beaches (although these are certainly great), the real luxury of St. Pete is its sunny disposition – the city is simply charming. The people are laid back and welcoming, so there’s plenty of love everywhere you turn.

Nicknamed ‘The Sunshine City’, St. Pete has an astonishing 361 days of sunshine per year on average, and won the Guinness World Record for the most consecutive days of sunshine: 728 days (just under two years).

The climate is humid and subtropical, with a rainy season from June to September. Because of this, it makes a stark contrast to the dour climes of the UK, and is therefore highly popular with British tourists.

Located on a peninsula between Tampa Bay and the Gulf of Mexico, St. Petersburg (AKA St. Pete) is in Pinellas County. The fourth largest city in Florida and the second largest city in the Tampa Bay Area, it has a quarter of a million residents.

But where does the discerning LGBT traveller go? Well, we’ve broken it down for you and given you some very convincing reasons to visit this unique city.

Here, then, are our seven reasons to visit St. Pete.

During pride, the whole resort was brimming with queer folk of all stripes, and the pool was practically frothing with talent. Go here, order a cocktail, and enjoy the view!

For something slightly lower key than Flamingo Resort, you could try Gay St. Pete, which comes highly recommended by the locals.

Georgie’s Alibi is another great venue. This is the place to check out top entertainment like Alyssa Edwards, Coco Montrese and Roxxxy Andrews from RuPaul’s Drag Race; Melissa McGhee from American Idol; and even Lady Bunny. Happy hour is daily from 4-9pm.

Enigma Bar & Lounge is also heaps of fun and always has free parking. On Central Ave, it stays open till 3am daily, so you’re guaranteed a great night.

The Vinoy® Renaissance St. Petersburg Resort & Golf Club is a luxurious, upscale St. Pete hotel owned by the Marriott group. Built in 1925, the hotel has always been a popular hangout for the rich and famous. Famous faces who have stayed at the hotel include Babe Ruth, Herbert Hoover, Marilyn Monroe, Julia Roberts, Brad Pitt, George Clooney, Tiger Woods, Olivia Newton-John and Harrison Ford.

If you want a touch of class but still want easy access to the sights, this historic hotel is located near key attractions such as The Dalí Museum, the Morean Arts Center, Tropicana Field and the beaches.

The rooms all sport stylish decor, expansive marble bathrooms, plush bedding and LCD TVs. There are five fabulous restaurants, a full-service spa, a beautiful 18-hole golf course, an ultramodern fitness center, an outdoor pool and more than 40,000 square feet of space for weddings, receptions, banquets and conferences. The architecture itself is a thing worth seeing – whether you stay here or not.

We were at St. Pete during Pride – which was spectacular, and lucky enough to be in the parade with Miss St. Pete – a fabulous character – and many of the commissioners. The parade was vibrant and well received. The night parade was much more fun than most daytime parades we’ve taken part in. There’s a definite carnival atmosphere, and the whole town comes alive. 250,000 people took part in St. Pete’s epic pride celebrations – the largest pride event in the whole of Florida. Beat that, Miami!

At the recommendation of the locals, we headed to Stillwaters Tavern on Beach Drive – and it was spectacular. We arrived just five days after the opening and the food was perfect, on time and super fresh. Executive Chef Jeffrey Jew is also a total hottie!

The concept for Stillwaters Tavern is to blend Old World flavours with New World classics. The result is a mashup of cultures that serves up some really tasty grub. We recommend the Vietnamese pho rolls for starter and the Tavern filet for entree. For sides, you need to grab some grits and some Creole mac ‘n’ cheese. Try the bourbon sticky balls for dessert.

This has to be high on your list of things to do in St. Pete.

For something a bit more homely, try The Chattaway on 22nd Ave S. Although, on the outside, it’s as Floridian as the rest of St. Pete, the interior boasts an English-themed tea room at the back, where you can enjoy the very best afternoon tea in town, along with classics such as fish and chips, and an award-winning Chattaburger. Their philosophy is, quite appropriately, ‘Keep calm and eat Chattaburgers’.

Run by Helen Lund and her son Everett, the back tea room is an ode to British culture, with memorabilia from the jubilee on the walls and even a red phonebox picture frame celebrating Helen’s involvement with the LGBT community – win-win for a British queen. Helen is London born and bred, but has lived in Florida for decades. She has been in charge of The Chattaway since 1951 and is as much a part of its charm as the decor. We really can’t recommend this place enough.

The Dali Museum, which opened in 2011, is particularly intriguing. You can see Dali’s fascination with queer polymath Leonardo da Vinci. His grasp of tradition and form is revealed first, before you see his growing experimentalism and flourishing arrogance. The whole place is beautiful and a work of art itself.

If you’re really into art, you can also check out the Chihuly Collection – a unique showcase of the glass artworks created by Dale Chihuly – and the city’s fabulous Urban Mural Tour.

If you’re still keen on beaches (and who isn’t?), then make sure you at least try some of the delicious seaside cuisine St. Pete has to offer. Passe a Grille Beach is fantastic.

Especially on Sundays, Sunset Beach is very much a gay beach. Who doesn’t love sea, sand and sexy company?

Adam stayed with The Vinoy® Renaissance. He was kindly hosted by Visit St. Pete/Clearwater.

You can find out more information at the Visit St. Pete/Clearwater website and at Gay St. Pete online