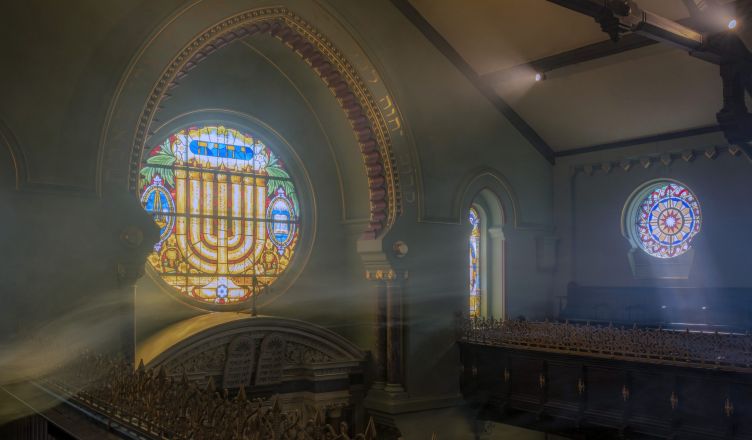 After two years of closed doors and a decade of hard work, Manchester Jewish Museum is finally open again to the public. Something of a hidden jewel only 15 minutes’ walk from Manchester Victoria Station, the site of the former Spanish and Portuguese synagogue has been injected with new life due to support from the National Lottery Heritage Fund and an exciting installation from Turner-prize winning artist Laure Prouvost for Manchester International Festival.

The building, which originally opened in 1874, was a thriving synagogue until the late 1970s, when much of its community dispersed to other areas of the city. On 25 September 1977, it hosted its last wedding, and it wasn’t until 1984 that it reopened as the Manchester Jewish Museum. But due to the size of the venue versus the wealth of materials possessed, it was only ever able to showcase about 1% of its collection of 31,000 items.

Then, in 2015, the museum’s Capital Development Project was launched, followed by years of careful planning and preparation. It wasn’t until 2019 that the venue finally closed for two years to undertake the work necessary to expand the museum’s size and restore its gorgeous synagogue.

Now the refurbished the Grade II*-listed building has opened, it’s clear just how much care and attention to detail has gone into the restoration. The museum has doubled its size by adding an extension to house its new exhibitions space, café, shop and learning studio with kitchen, and the historic synagogue has been lovingly returned to its former glory.

The gallery space explores the three themes of journeys, communities and identities through the lens of Jewish Manchester. On show is an ornate plate gifted and returned generations later from one family to another, a cricket bat made from a washboard by a boy who wanted to take part in his favourite sport, and texts in both Arabic and Hebrew that chart the journeys of Manchester’s Jewish communities both in and out of the city.

The museum encouraged local people to submit their own items for the collection, through The Object Project. As a result, much of the content has been informed and sourced by Manchester’s Jewish community. This is most clear in the Synagogue Voices project, where locals shared their memories of the synagogue.

You can also listen to first person testimonies and recordings, including the story of one man who survived the Titanic and another who did not, a performance of a local Yiddish pantomime (with its very own dame), and the stories of those who came to Manchester and those who left. These sit alongside physical artefacts – a script, a dress, a notebook – that tell more than words alone could.

The gallery also features an exhibition of quotes from diverse Jewish voices that talk about what Jewishness, Britishness and being Mancunian means to them. From gay to straight, religious to secular, Zionist to non-Zionist, the range of views on display defies stereotypes and celebrates the unique melting pot that is the Manchester of today and yesterday.

The Spanish and Portuguese Synagogue

The real showstopper, for many visitors to the museum, is the original Spanish and Portuguese synagogue. The oldest surviving synagogue, it was built by the city’s Sephardi community, who originally hailed from Spain and Portugal, and later spread into North Africa, the Middle East and other parts of Europe.

One of several synagogues built in Cheetham Hill, the Spanish and Portuguese Synagogue is the only one that remains (its fellows either demolished or converted to business premises), and it stands as the largest synagogue in contemporary Manchester. First conceived by the community on 4 February 1872, the synagogue opened on 6 May 1874. Now, 150 years later, it feels both brand new and venerable.

The first sight when you open the doors either onto the Ladies’ Gallery or on the ground floor is the fantastic stained glass mural of a menorah, which glows atop the Synagogue’s Ark. This filters amber and gold sunshine into the room in a stunning display of pride and devotion. The light catches off the gold flourishes and red details. This memorial window commemorates former Synagogue President, Ezra Altaras, who passed away in 1913.

When his family paid for the memorial window, which sits proudly over the Synagogue’s Ark, other families paid for the smaller memorial windows that dot the ground floor. Throughout the museum, over 40 magnificent stained-glass windows are in place, many of them depicting biblical scenes which will be familiar to Jews and gentiles alike. Others have a bold mosaic effect reminiscent of the zellij or azulejo tilework often found in Arab and Iberian architecture.

The colours of all these windows are bright and crisp, with only the black text occasionally showing signs of fading over the years. All but four if the stained glass windows are original, which stands as a testament to the care this building has received when so many others have been razed or converted.

Though the original glass in these windows is no longer produced, experts have used the closest extant materials to remain as close as possible to the originals. The end result is that it’s very difficult to tell which windows have been replaced – to my untrained eye, I couldn’t see the difference.

Beyond the windows, the walls, too, have been returned to their former glory. Years of magnolia paint were stripped back to reveal the original decorative scheme and this was used to inform the current colours and detailing. The original Moorish details have been lovingly restored, while also taking influence from iconic architecture such as the Alhambra Palace in Granada, Spain.

The wooden columns that support the Ladies’ Gallery are each unique with carefully painted patterns in red on gold. Originally, the restoration team had tried to use a stencil to ensure consistency, but found that each column is slightly different from its siblings, so the whole lot had to be done twice to get it right.

The whole synagogue is a joy to behold. Multifoil and horseshoe arches, arabesque motifs and stuccoed chandeliers add flashes of decadence set against the solemnity of dark wood pews and exposed beams.

For the team behind the restoration, the typically Muslim flourishes in a Jewish holy space symbolise, as the staff affirm, the richness of life in Cheetham Hill and Manchester more widely. As well as representing an important part of Jewish life in Manchester, the synagogue also stands as a unique performance space which will host a year-round programme of live cultural events, gigs, shows and concerts. 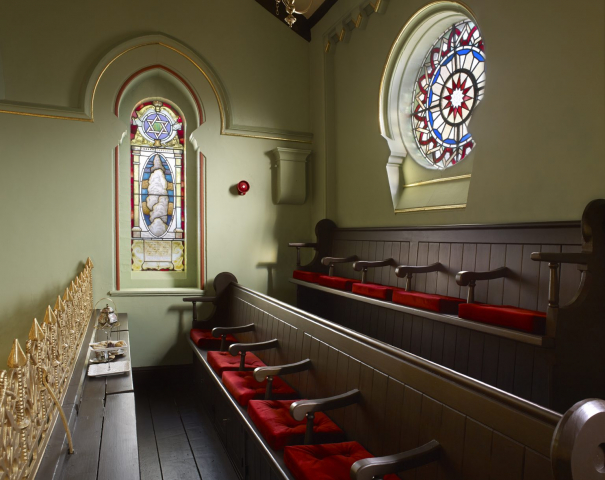 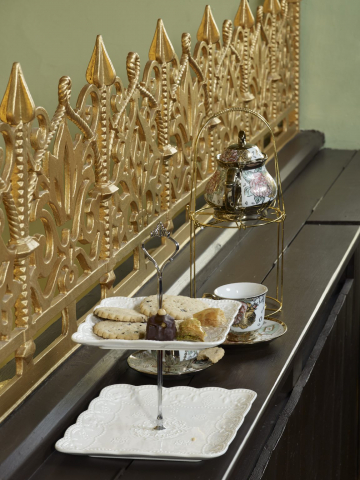 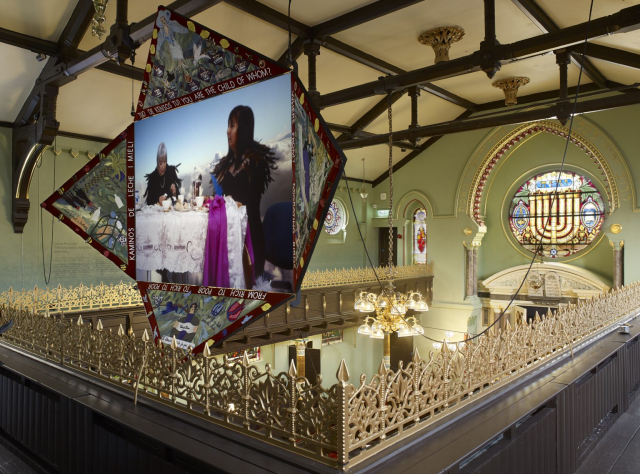 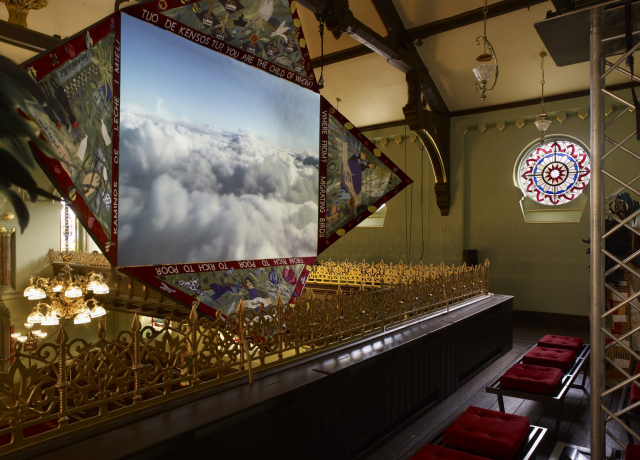 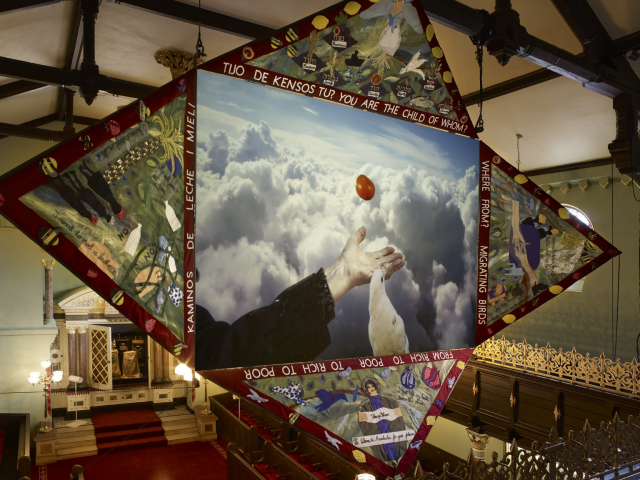 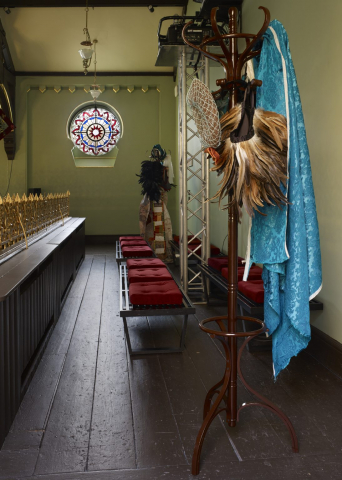 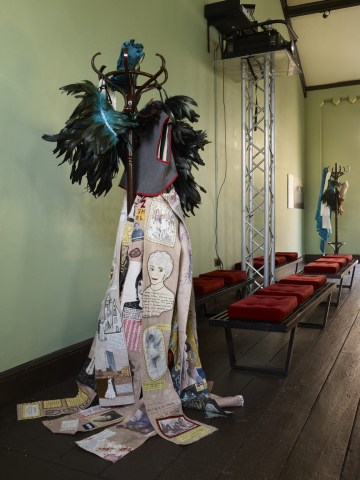 Laure Prouvost’s installation The long waited, weighted, gathering is a co-commission between Manchester Jewish Museum and Manchester International Festival. The immersive installation includes a new film, which will play in 15 minute cycles on a screen suspended from the ceiling of the synagogue. Inspired by the synagogue’s legacy at the heart of a community, the installation draws on the oral histories from the women who used to sit up in the Ladies’ Galleries of Cheetham Hill and Didsbury.

The installation includes a bird motif expressed in hand-crafted glass birds that peer down from the rafters and in imagery threaded through the film. This represents the bird’s eye view of the women, perched high above the men, but might also reference the tendency of some women to wear tall hats adorned with feathers – a way to make themselves seen by the men below. According to our tour guide, the separation of the genders only served to add mystique in the eyes of a few, romanticising the men below or the women above.

Local Sephardi women with family ties to the congregation were invited by Provoust and film-maker Ciarán Wood to appear in the film. The aim was to capture the reactions of these women as they discovered the stories unearthed in the museum’s oral history collection. In this way, Provoust and Wood aim to document the women’s own personal experiences of sitting in that space.

Accompanying Prouvost’s installation will be brand new artworks created by the museum’s resident Women’s Textile Group. During lockdown, fortnightly zoom workshop sessions led by local textiles artist Jo Scorah, allowed the group to create the artworks. Scorah’s her practice explores her own own ancestry in Aleppo, Syria, and she aims to build bridges through art and education.

The former succah (a type of ceremonial hut used for the celebration of Sukkah) built at the rear of the synagogue now has new life as the museum’s new Learning Studio and kitchen. The Learning Studio offers a range of activities for children and adults, with in-house and guest tutors, such as baking, song writing and religious education.

Until 6 August, participants can also take part in a series of events called Eat the Archives with theatre-chef Leo Burtin. This programme brings people together for community feasts, for events online and in person, and to learn about Jewish food.

Burtin hosts the museum’s Knowledge Sharing Day on Thursday 28 July 2021, from 11am-5pm, followed by Burtin’s book launch at 5.30pm. Tickets (which are free) include a vegetarian lunch.

The museum also includes a new café with a milk kitchen – that is, vegetarian food prepared in the kosher style. This means that the cooking isn’t observed by a rabbi, but is made as it would be prepared at home, without the mixing of dairy and meat products.

A small selection of wholesome dishes are on the menu, suitable for vegetarians and those eating a kosher-style diet. Top of the list is the ‘It’s Not a Salmon and Cream Cheese Bagel’. A delicious spin on the Ashkenazi classic of schmear and salmon lox, this dish features vegan cream cheese smeared on a soft bagel, topped with translucent carrot lox that cleverly resembles smoked salmon, with slices of fresh red onion, beef tomato, capers and fresh dill.

For those cold winter nights, there’s a hearty vegetable cholent with challah bread. Instead of meat, this stew uses sweet potato, carrot, pearl barley and beans for a filling dish, served with the traditional bread eaten on Shabbat.

Other dishes include a lentil and spinach soup, falafel with salad or pita, and cake or fruit salad for dessert. Prices are very reasonable, from £4.50 to £6.50 for each of the savoury dishes.

Information on location, accessibility and how to get to the museum is available at manchesterjewishmuseum.com. Tickets are available for entry through to the end of July, with more dates being added regularly. The venue is advance booking only with limited capacity, so you are advised to book early to avoid disappointment.