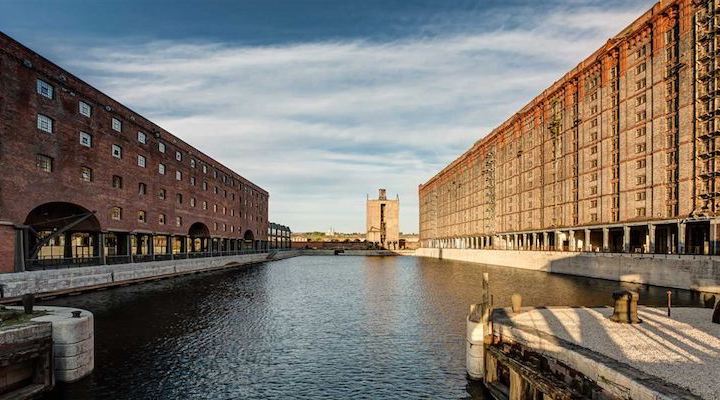 Vada Magazine recently visited Liverpool, staying at Titanic Hotel Liverpool located opposite the old Tobacco warehouse at Stanley Dock. It’s location, just 5 minutes’ taxi ride out of the city centre (and gay bars and clubs) means the hotel boasts a lot of space, throughout the public areas (including the Rum Bar, and Stanley’s Bar and Grill restaurant) and the 153 rooms and suites. Having opened in 2014, Titanic Hotel Liverpool is part of a UNESCO world heritage site. The building’s history is prevalent from the information displays in the reception area to the exposed girders and superstructure of the building, shown off in the rooms, enhancing the industrial-chic look. So how well does Titanic Hotel Liverpool serve the LGBT community?

Service in Titanic Hotel Liverpool was certainly a mixed affair. At check-in (at peak time on a Friday afternoon) we were in a queue that pretty much went out the door. We put this down to staff training as we noticed not every guest was asked for the usual credit card swipe for any incidentals. We were not for example; however our welcome was polite and positive and it turned out we received an unexpected upgrade. We noticed bellboy baggage trolleys but these were unused, a wasted opportunity. However as two gay men checking in we did not feel any uncomfortableness around booking a double room.

We asked at reception if we could extend check-out by an hour to accommodate our plans for the rest of the weekend (from the standard 11am to midday), but were told the hotel would only be able to extend this by 30 minutes because it was “completely sold out”, yet we witnessed a booking over the phone for that night a few minutes later so this was clearly not the case. A much better approach, which we typically receive at other 4 and 5 star hotels, would be to check the availability for our specific room and offer to store bags if an extension were not possible.

At the Maya Blue Wellness conversely service was exemplary rather than curt, with staff being friendly and helpful from the moment we walked in. 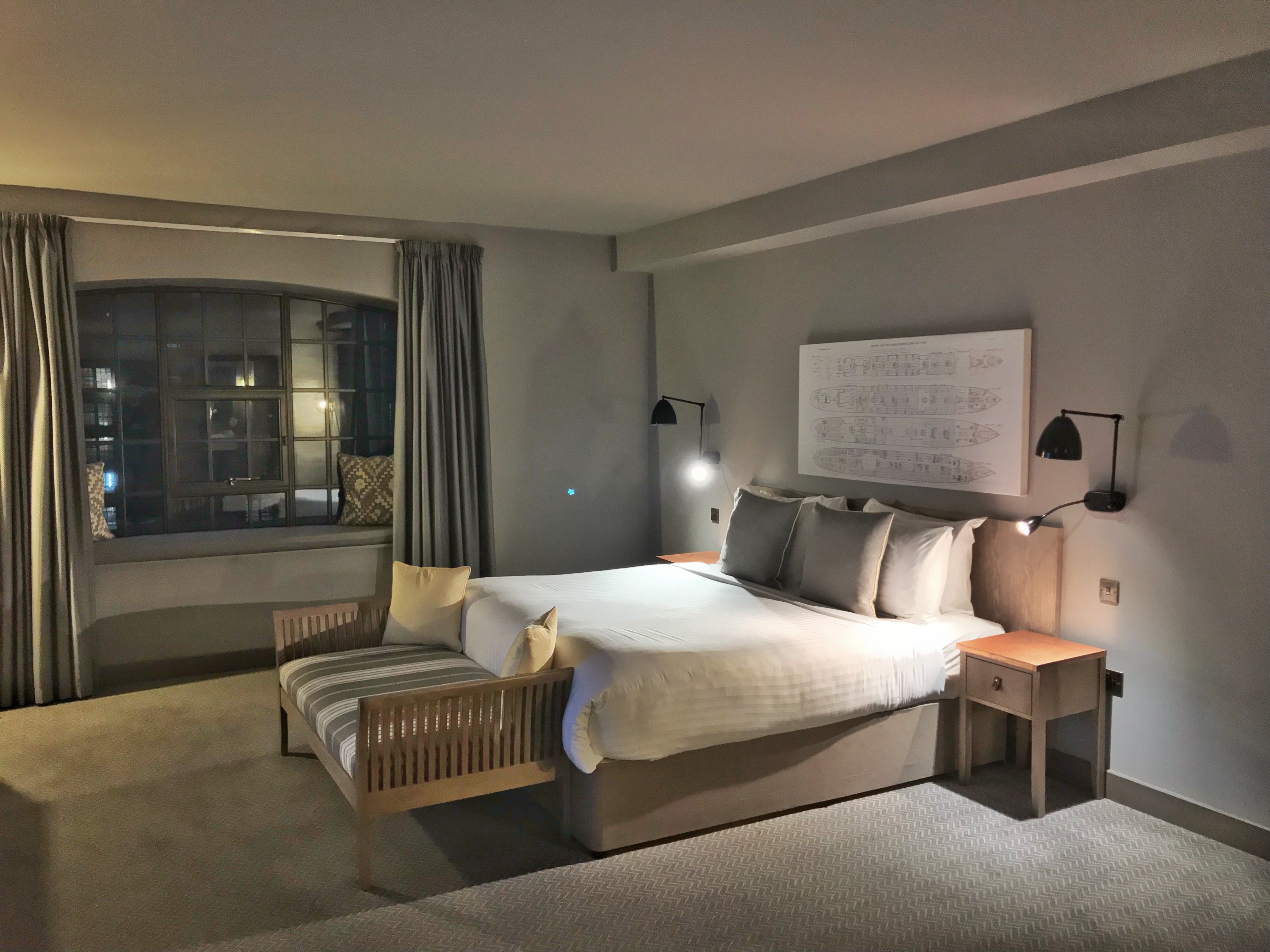 Having been upgraded, we stayed in room 418, the Lyster Suite at Titanic Hotel Liverpool. As previously mentioned, every room in Titanic Hotel is significantly larger than you would expect from an inner city 4 star property. In fact the scale of the hotel is only really imaginable when you’re stood on a floor looking down the length of the exceptionally wide corridor. The Lyster Suite is no exception, with the entrance hallway opening into a double living space, bar and kitchen to one side and bedroom with en suite to the other. There is also a walk-in wardrobe at a size Carrie Bradshaw could survive with, and a further toilet.

The suite is finished in exposed brick, and the furniture does create a boutique finish. We liked the freestanding full length mirror in the bedroom, and telescope on the coffee table for example. The wooden bar unit, separate bath and shower and double sink all impressed. The bed was exceptionally comfy, and the window seats in both bedroom and living room provided a cosy space to enjoy a glass of wine and enjoy the architecture of historic Tobacco Warehouse on the opposite side of the dock. Some other amenities worked well, including the free high-speed WiFi, TVs, plenty of power sockets near the bed and aromatic Mulvenna bathroom products. 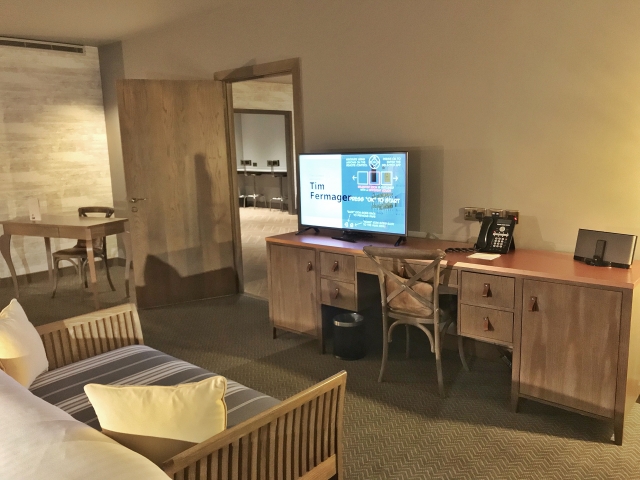 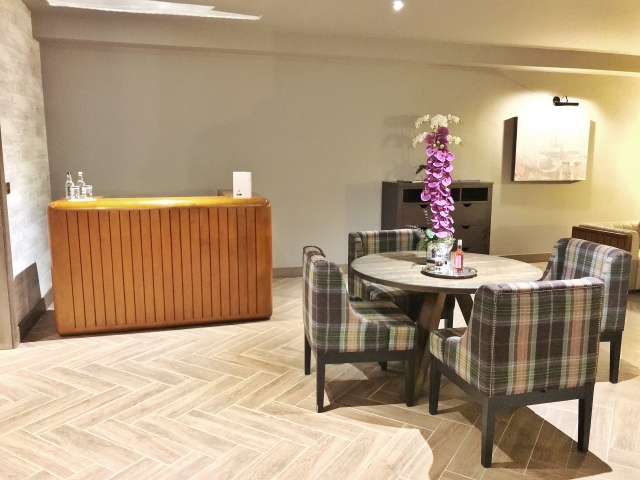 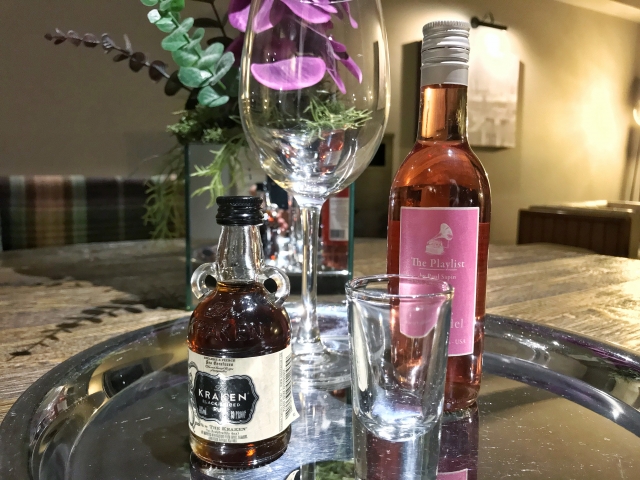 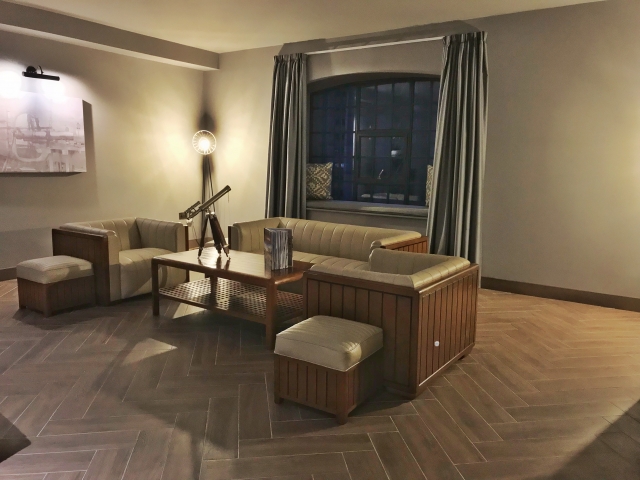 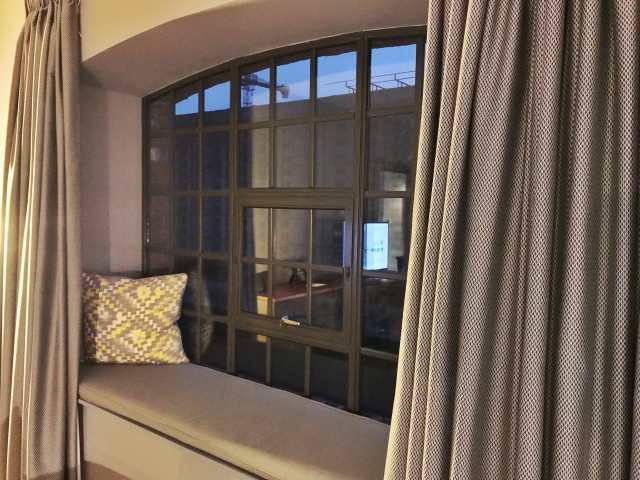 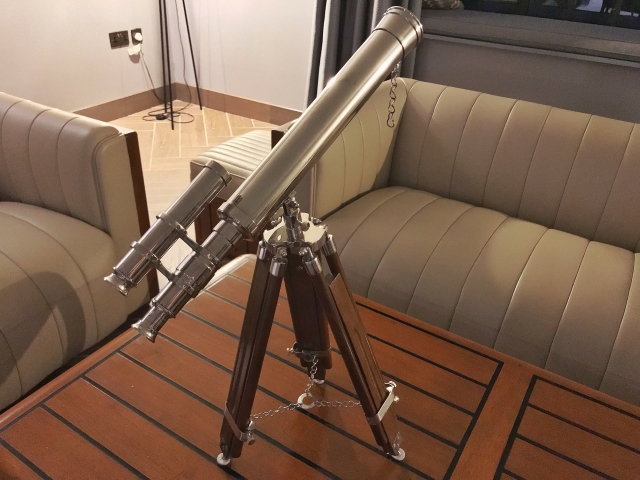 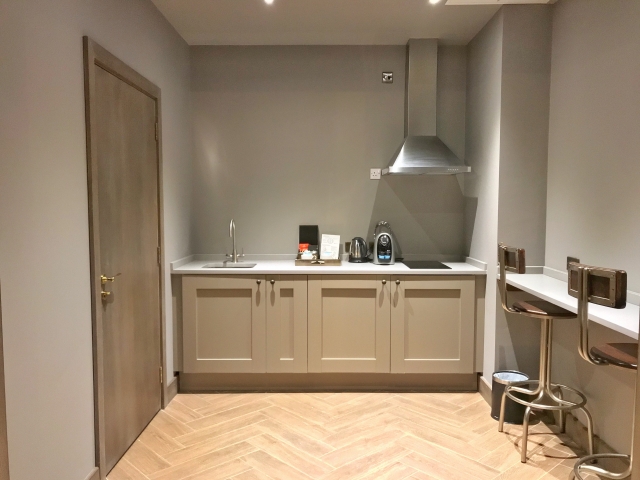 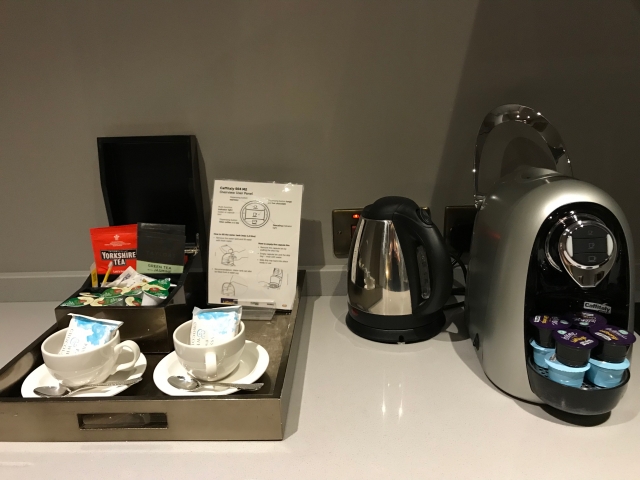 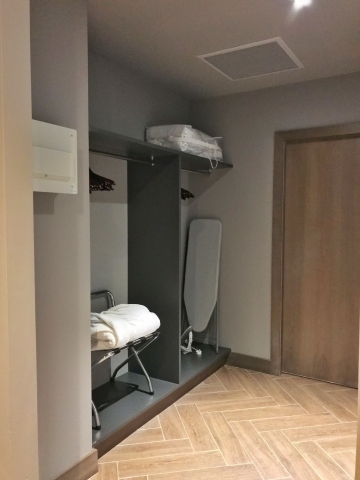 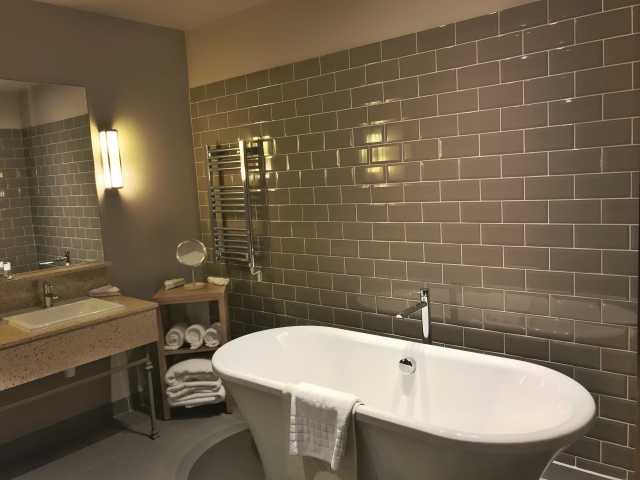 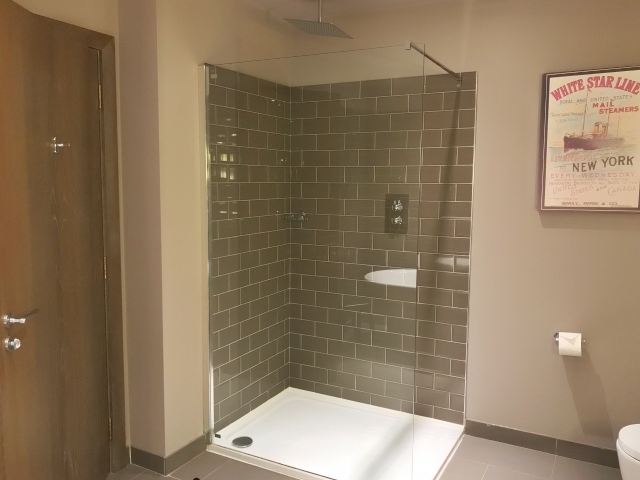 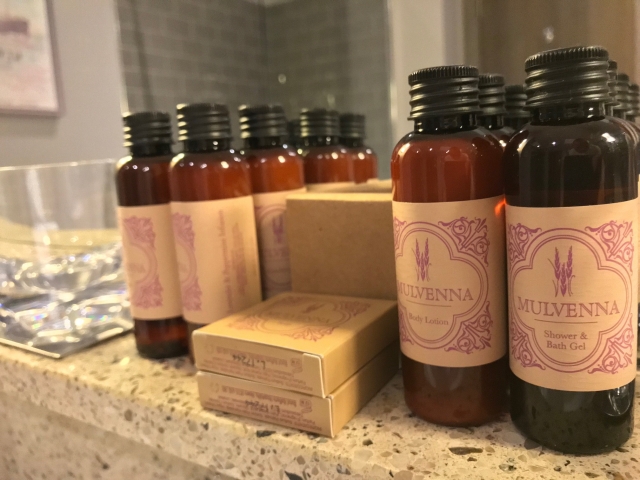 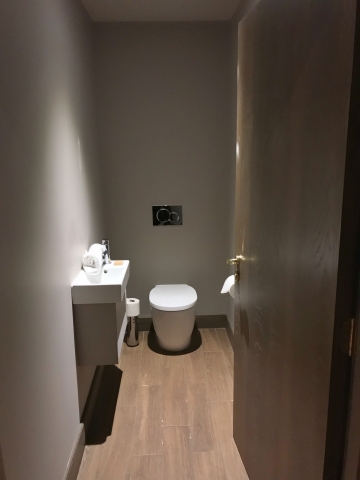 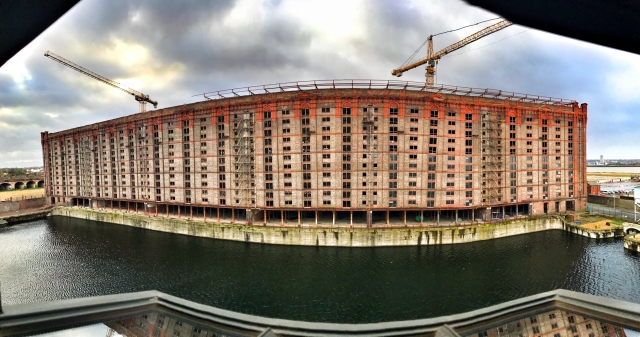 Despite the size, we couldn’t help but notice certain items that were lacking or unfinished in our suite at Titanic Hotel Liverpool. For example, we received a welcome amenity of a bottle of wine and a taster bottle of rum, with only one glass for each. For a room booked for two we would have expected two of each type of glass to be able to share. Moreover there were no further glassware available in the room nor was there a minibar available despite an actual physical (but completely empty) bar. Using fake rather than fresh flowers and a lack of a heated mirror in the bathroom both demonstrated touches that in our experienced opinion should be considered in a top category suite. However this will not be the case for lower room categories. 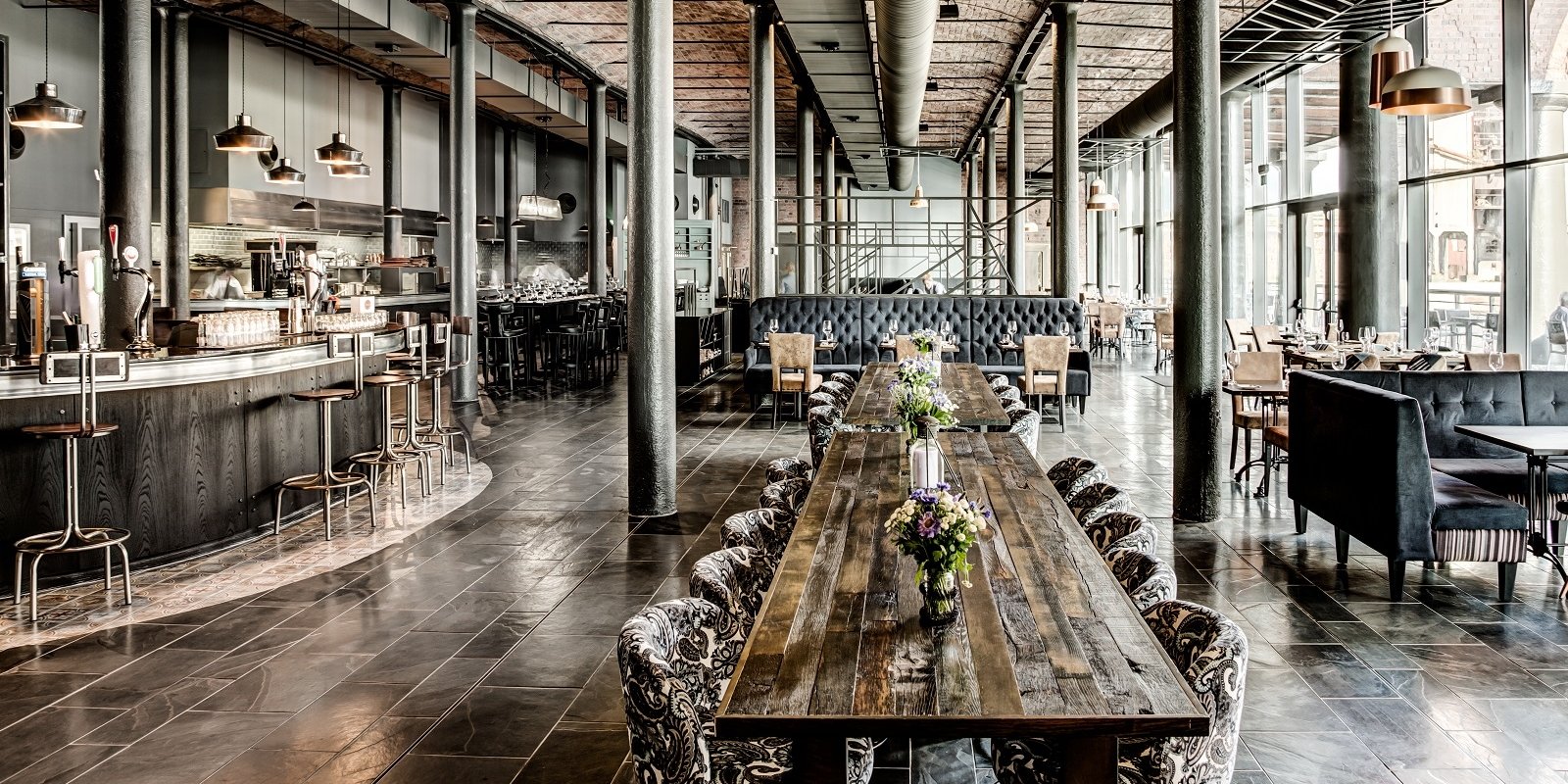 Stanley’s Bar and Grill within Titanic Hotel Liverpool continues the trendy industrial interior, offset with bar, polished copper lighting, and soft materials. Breakfast service and dinners are served in this vast space, and we suggest making a booking for the latter.

Breakfast is a typical buffet affair with a selection of hot and cold items. We were a bit disappointed to find cheap juices from concentrate rather than freshly squeezed for a four-star establishment, and a lack of our coffee ever arriving, but on the whole a relaxed start to the day.

The dinner menu had a good selection for a bar and grill restaurant, although a seasonal special menu would be a welcome addition. We tried the parsnip and spiced apple soup (£7) and parmesan risotto cakes (£7) to start, followed by beer battered fish and chips (£18.50) and duck breast (£21.50) as a main course. All were well presented, arrived promptly and moreish. From a reasonably well-stocked wine cellar, we chose a bottle of Portillo Malbec (£28), which has won a couple of awards. Dessert options comprise a welcome selection of classic comforts including chocolate torte, sticky toffee pudding, and also a fig frangipani tart (the latter two which we devoured). Both were well executed and of sensible portions. 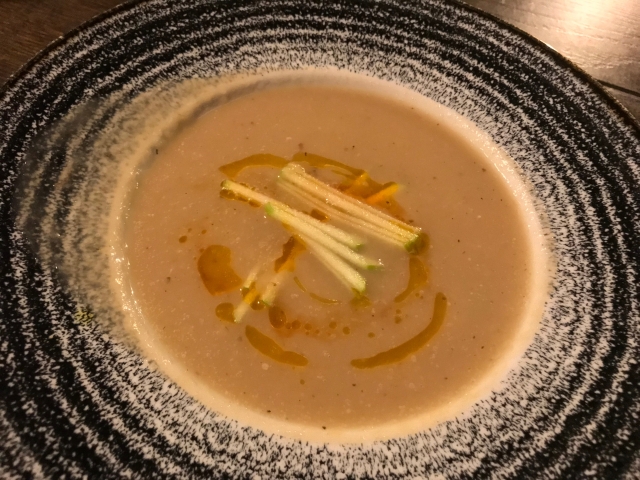 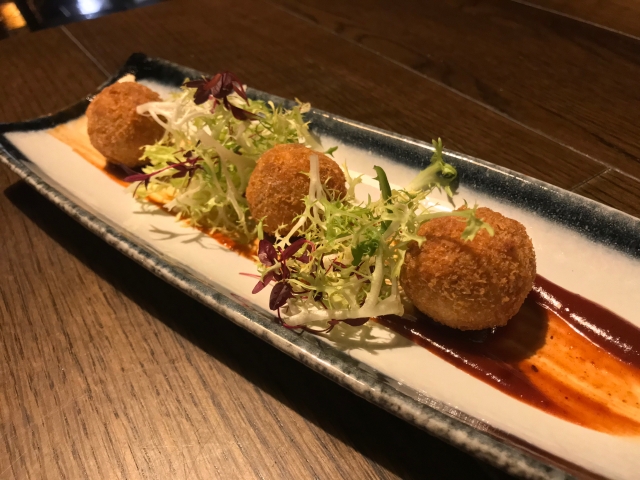 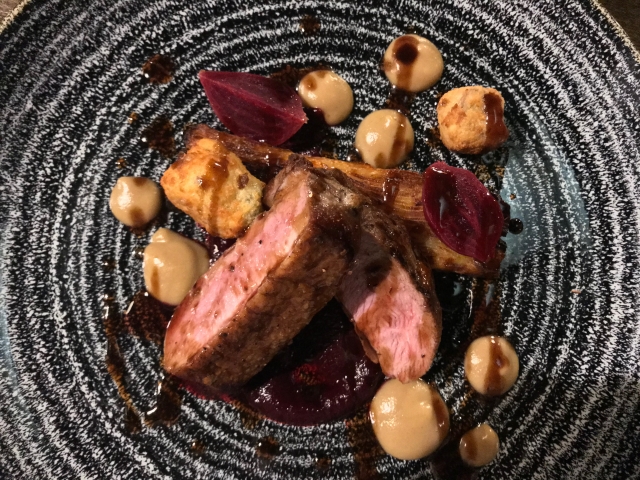 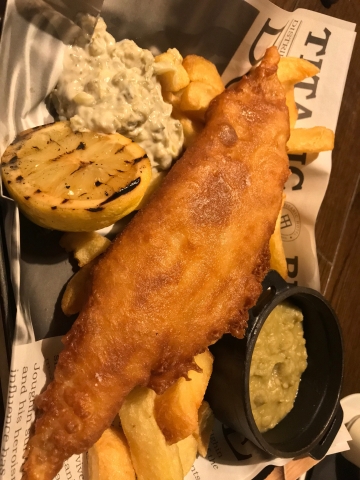 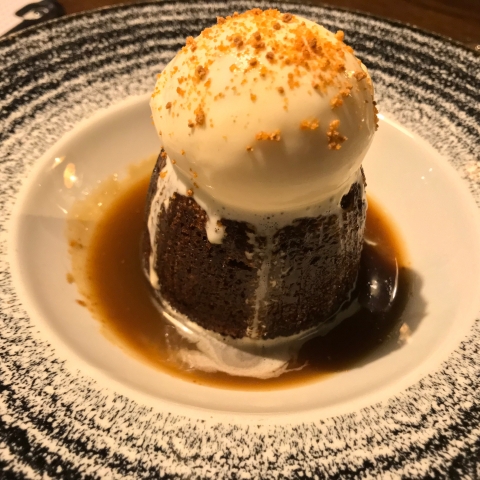 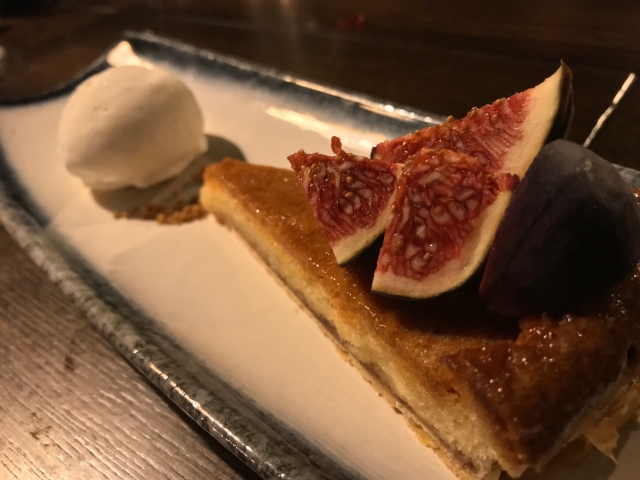 During both breakfast and our dinner reservation at Stanley’s Bar and Grill we were kept waiting for at least 10 minutes to be seated because of a lack of host/hostess at their post. During dinner there was a problem with the bill that took several attempts with the waiter going back and forth to resolve: in short, clumsy. 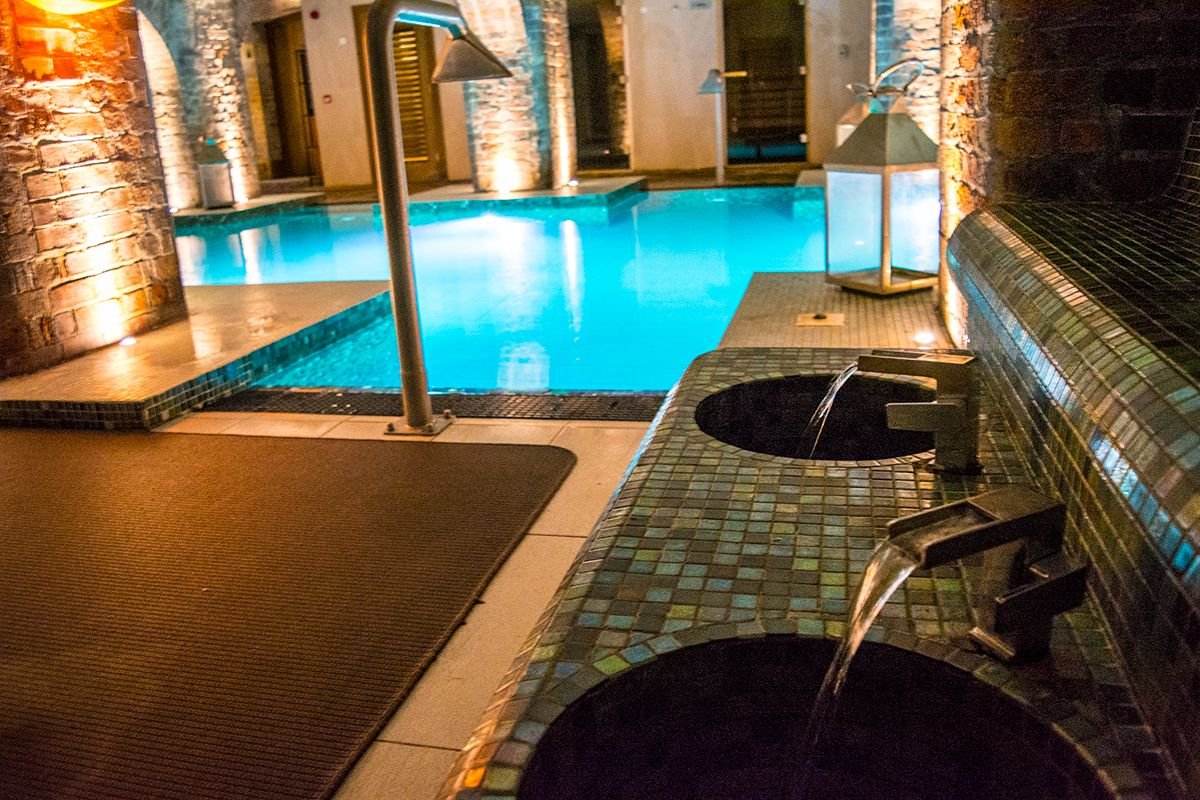 Other onsite amenities within Titanic Hotel Liverpool include the Rum Warehouse conference centre and Maya Blue Wellness. We paid a brief visit to the spa, located on the basement level and were impressed by the gym and fitness area. The spa area is a sanctuary in the form of an underground cove of tranquility with the vaulted brick ceilings reflecting light from the thermal pool. There is also a sauna, steam room and also a sanarium (somewhere between the two). We were surprised to find that unusually spa access is not included in room rates and must be booked in advance. The supplement is £20 for hotel guests (although access to the gym is included) and £25 for non-guests.

A wide selection of treatments are available, including a combined Full Body Massage and facial for £99, and a Couples options for £199. 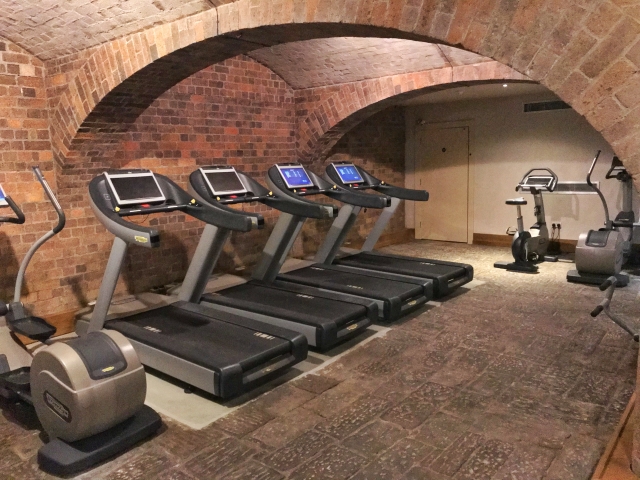 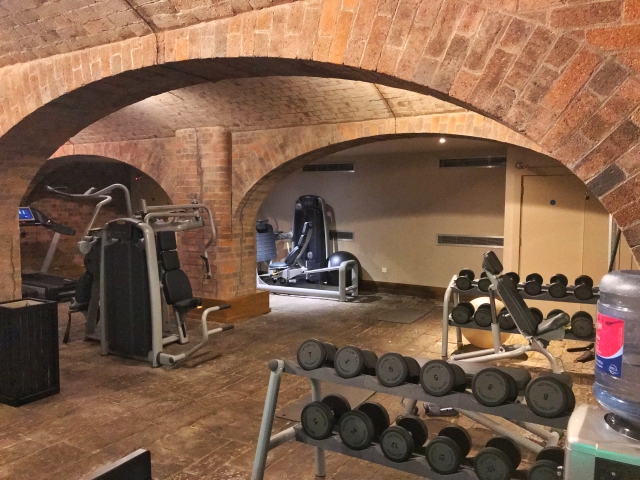 During our stay at Titanic Hotel Liverpool we could not help but stirred by the space and transformation at Stanley Dock into a four-star hotel. The history, rooms size and interior design impress. Overall Titanic Hotel Liverpool ticks the boxes for location (and short taxi ride to gay bars and clubs, cultural venues and restaurants), style and luxurious spa. Therefore Titanic Hotel Liverpool does lend itself to be an attractive option for an LGBT-friendly city break. We found prices from £95 for a classic room and from £135 for a superior dockside room (our originally booked category), which are favourable compared with equivalent hotels. However we would add a word of caution about the service. On the plus side, there is no unpleasant atmosphere around LGBT guests; however from what we observed there is noticeable staff re-training required to ensure an overall meticulous and consistent standard that is both polite and professional for a four-star hotel.

For more information and to book, visit titanichotelliverpool.com.