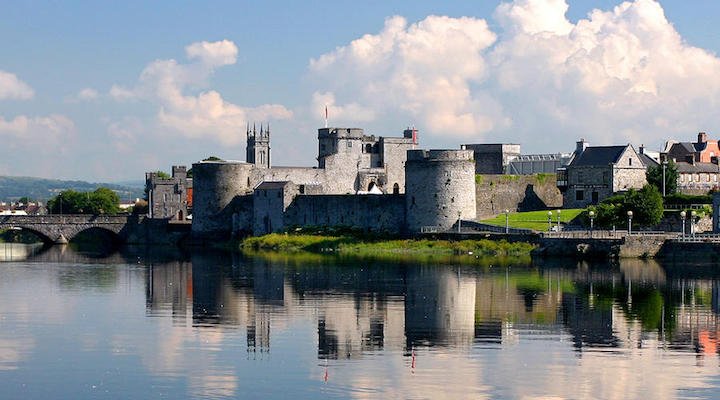 Sabi Phagura
Sabi Phagura is a health, fitness, travel and lifestyle journalist with over 14 years experience in both print and broadcasting media. With Luxurious Magazine, Sabi has travelled the world and experienced some of the finest things that it has to offer. Sabi is an eager and enthusiastic journalist, regularly finding unique and exciting destinations. She always creates articles that showcase the subject in the best light via her wealth of knowledge in the luxury travel and dining sectors.

Limerick has had a tough past which has been well documented in Frank McCourt’s memoir Angela’s Ashes and the film adaptation. And despite its medieval and Georgian architecture, the economic downturn hit the city hard. But it in recent years it has bounced back fighting fit after it became Ireland’s first-ever Irish City of Culture in 2014. I went along to find out exactly what is attracting tourists in their hoards to this mid-west located region on the beautiful island.

I’ve always loved Ireland not least because of its vast space and greenery but also because of its friendly folk and my weakness of a traditional Irish pub. But instead of going into a boozer, which is normally the case once I’ve arrived, one of my first stops this time was to a little place called Adare – aptly named as Ireland’s Prettiest Village’. Snuggled in a woodland setting amidst the rich serene farmlands of the Golden Vale by the River Maigue, Adare is a model village dating back from the time of the Norman Conquest. Adare has been home to the Earls of Dunraven (Quin family) for over three centuries who had a huge input in shaping the community by creating jobs in the area. A meander around this tiny village with its 13th century Desmond Castle, a manor, a church, and thatched cottages lining its broad streets punctuated with stone buildings and ruins, it’s like experiencing living history. There are plenty of cozy tea shops and pubs from where you can admire the views from.

Limerick of yesteryear – as mentioned briefly above – was perhaps most well documented by Pulitzer Prize-winning author Frank McCourt in his book Angela’s Ashes. It’s no surprise then that The Frank McCourt Museum, which sits inside Frank’s former school on Hartstogne Street, was opened in the city five years ago to pay homage to him.
The museum depicts the 1930s classroom where Frank and his siblings attended, exactly how I had imagined from the book. It contains many artifacts from the book and even houses Frank’s Ashes tin the same room. Upstairs you can find in detail a recreation of what the McCourt’s home would have looked liked inside. From the grim kitchen with all the pots and pans, dining table and clutter you would expect to find in that era to the bedroom with uncomfortable beds and a few scattered toys. One thing you can certainly feel is the cold which would have been unbearable in the absence of our modern day’s heating provisions.

Markets by nature are amazing, bustling, noisy places and Ireland’s oldest market called the Milk Market, open from Friday to Sunday, in Cornmarket Row is no different. It’s still as popular today as it was when it first flung its doors open in the early 19th century. It receives between 6,000 and 10,000 visitors on Saturday alone. Having been converted to a covered market in 2010, it is a selling ground for fresh produce from fruit and vegetables to organic raw dairy to organic butter. Smells of pastries, bread and coffee waft throughout the place. You can literally have a field day tasting scrumptious food – just don’t overdo it on the breakfast. Oh and if quirky foods are your thing, don’t forget to try out the turmeric-laced paleo bars and Turkish Baklawa. The latter has been hailed as better than the one sold in the country itself. I suspect it has something to do with the stallholder being Turkish.

Limerick city can easily be toured by bike or on foot but if you’re looking for an edgier way of getting around, then a horse and carriage is just the ticket especially when visiting a castle. We took full advantage of Limerick Carriage Tours to take us to King John’s Castle which has been standing tall for over 800 years. It’s so steeped in history that it holds secrets to the events that helped shape modern day Britain from the time the Normans lived here.
The tour of the castle is a highly interactive experience where you can push buttons, play videos and hear from people who lived and worked here describing the conditions they worked in as well as the fight for their lives during the violent sieges of the 17th century. Other artifacts can be discovered by opening various draws giving you an experience where everything comes alive with a simple touch. The building itself is fascinating which can be seen from all angles around the city. We even managed to even get up close and personal to it from a kayak in the River Shannon. With all that walking around it was a great opportunity to give my upper body and abs a good workout while my legs were able to take refuge in the small vessel.

I’m a firm believer that after a workout, whether sightseeing or a gym session, a massage is what the body needs. Just as well there are spa facilities at the Radisson Blu Hotel in the city, where we stayed – just 15 minutes from Shannon Airport. Not only was the massage soothing but the heated bed warmed up my body quicker than if I had sat in a hot bath after that kayaking in what I can only describe as almost sub-zero temperatures.

I had enjoyed my pint of Guinness at the hotel’s Quench Bar, wine with a delicious dinner at the Porter’s Restaurant but there was just one more thing to devour before I left Limerick – an Irish coffee. I held out until just before heading back to the airport. That’s because I just had to taste the right concoction at the Foynes Flying Boats & Maritime Museum. It was here this mighty drink was born when it was created by Chef Joe Sheridan. He decided it was just the tonic for some weary passengers returning to the airport restaurant after bad weather had hampered their New York flight. And oh my am I glad he invented it. It was so thick and creamy with that kick that I ended up having two. Hic.

Room rates start from 79€ per night at Radisson Blu Hotel & Spa, which is located on Ennis Road, Burtonhill, Limerick, Ireland.

Sabi Phagura is a health, fitness, travel and lifestyle journalist with over 14 years experience in both print and broadcasting media. With Luxurious Magazine, Sabi has travelled the world and experienced some of the finest things that it has to offer. Sabi is an eager and enthusiastic journalist, regularly finding unique and exciting destinations. She always creates articles that showcase the subject in the best light via her wealth of knowledge in the luxury travel and dining sectors.

View all posts by Sabi Phagura →