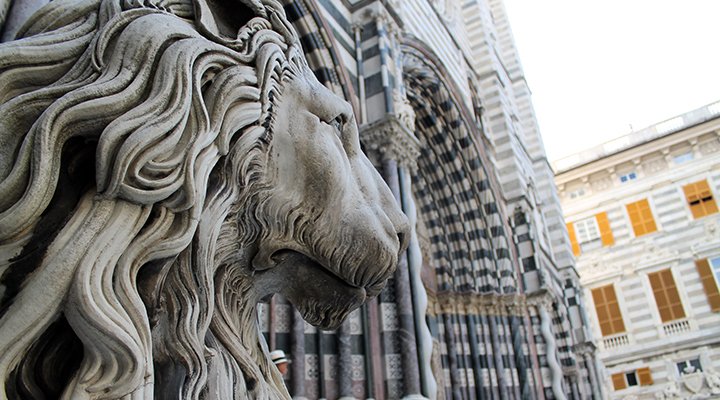 Cut through the strata of Genoa, and you’ll find layers of history, style and culture. These come together in a profoundly forward-thinking city where style and sophistication, modernity and tradition merge seemlessly for a unique and beautiful holiday destination.

Sunny Genoa is the capital of Liguria, and the sixth largest city in Italy. It is the birthplace of iconic world players such as Christopher Colombus, Niccolò Paganini and Giuseppe Mazzini. In recognition of its contribution to world history, part of its old town has made the list of UNESCO World Heritage sites. With one of the oldest financial districts in the world, its banks date back to the Middle Ages. Indeed, The Bank of Saint George, founded in 1407, still operates today as one of the longest running banking institutions. Meanwhile, the legacy of its traders and merchants is evident in the striking shipyards and steelworks, which have played a vital part in Genoa’s economy since the 19th century. 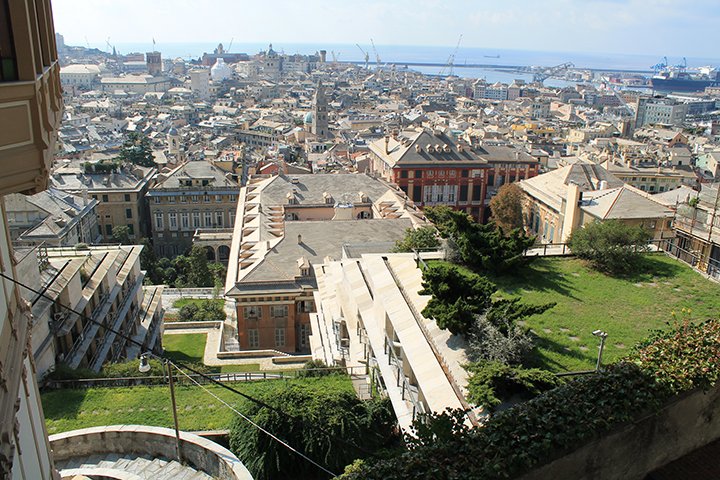 Nicknamed la Superba, which aptly enough means ‘the Proud One’, it is a city proud of its achievements and diversity, but with a thoroughly contemporary outlook. Over the few days we visited the city, we mingled with people from all walks of life, and found the Genoese to be a welcoming, cheerful bunch with a laidback cafe culture accepting of all. In this first instalment of our city guide, we look primarily at where to stay, but check back for food and drink suggestions, sights and tours, and more besides! (Don’t forget, you can also check out our tour of Genoa in photos.) 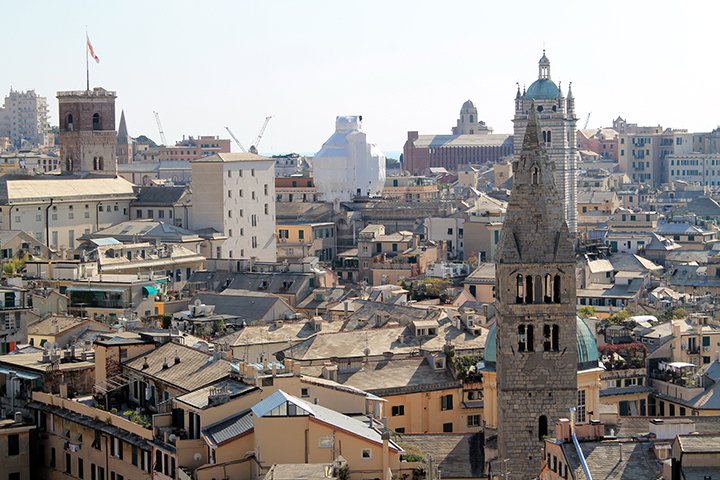 Accommodation in Genoa runs the gamut. From traditional B&Bs to luxurious aparthotels, the city has it all so you can choose from a smorgasbord of places to stay. We were lucky enough to try both a traditional guesthouse and a stylish contemporary hotel, reflecting the old and new sides of Genoa. But you can also try more intimate accommodations with apps like AirBnB and MisterBnB, or a more streamlined approach with the major chain hotels, if you prefer.

First we stayed in the quirky but charming B&B Vecchia Genova. Set in a sumptuous Genoese townhouse, the location is ideal. Coming through the vast, breathtaking doors, you come to the black and white tiled stairs (or a small traditional lift which we avoided). Ascending these was, I admit, a treat for my dramatic streak – I felt like Belle from Disney’s Beauty and the Beast, running up the stairs in some vast castle. Maybe that’s just me, though.

The B&B itself oozes old school style. There’s wrought iron everywhere, a balcony gorgeously adorned with flowers, and classic furniture with decadent flourishes. The bathroom was quite small by our standards, but most of the buildings in Genoa are tall rather than wide, due to the lack of ground space, and so the rooms are likewise high but narrow. Breakfast each morning was a sumptuous banquet of cold meats, fruits and pastries, which upped the simple continental breakfast to something much more exciting. Cooked eggs aren’t, sadly, something you’ll find often in Genoa, but the fabulously attentive (and gay) hosts Fabio and Paolo will ensure your requests are met, so ask if you prefer a cooked breakfast. 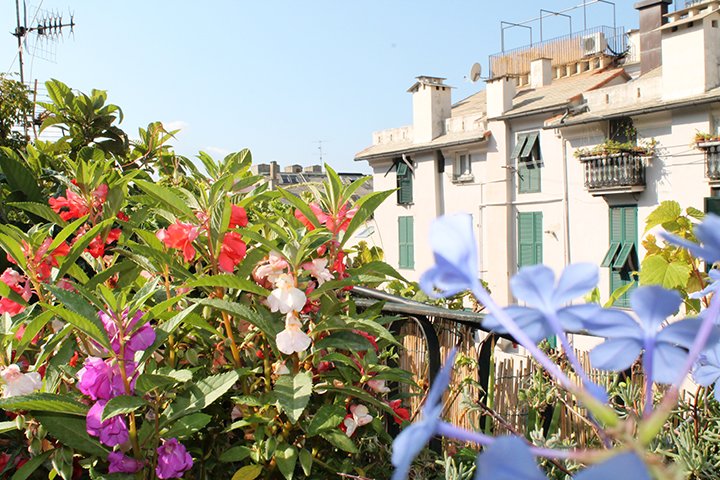 In contrast to the B&B Vecchia Genova, we also stayed in Le Nuvole Antique Residence. Another traditional building, this one had, at one point, its own private chapel (like many of the buildings in town). Below you’ll see the flourishes that remain of this original sacred space, which gives you an idea of some of the finer details in this otherwise very modern, clean hotel. Think tall, multi-level white rooms with flashes of colour and contemporary designer brilliance but the odd emergence of a lavish Genoese past, where the original colours and decor catches the eye and the imagination both. 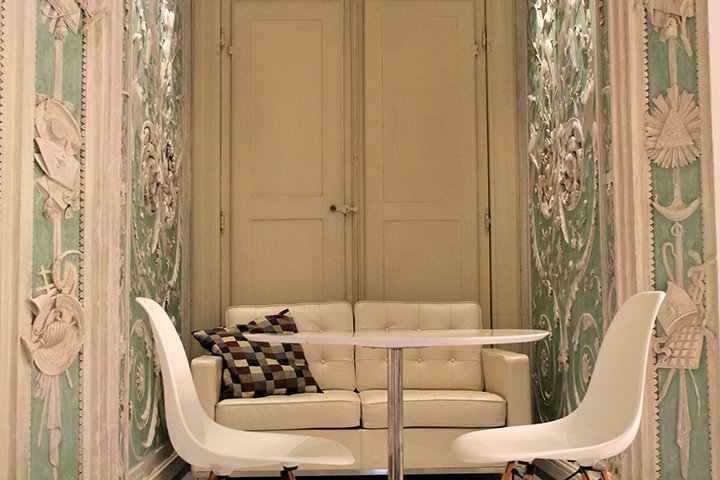 Our room was a duplex, with a spacious area for a single bed and desk on the top floor (great for reading and writing), and two single beds on the bottom floor, with a vast, tall window overlooking the rooftops and buildings nearby. The whole affair was light and airy, with the ladder-like stairs adding an attic feel. The bathroom was much larger than that of the B&B, with all the very latest modern fixtures and fitting, although the slight lack of space meant it was entirely possible to bang your head on the shower screen directly in front of the toilet when you stand up (our knees were mostly touching the glass when we sat down, which is an issue if you prize your own space).

Like the B&B Vecchia Genova, we struggled to get a hot egg here (cold, hardboiled eggs were possible), but unlike the former, they wouldn’t entertain the request at all. Breakfast was ultimately a disappointment at Le Nuvole Antique Residence, with the exception of the focaccia, which was salty, moist and delicious. The espressos, though, promise a decent kickstart to the day, even if your food choices are limited.

Check back tomorrow for The Vada Guide to Genoa, Part 2.