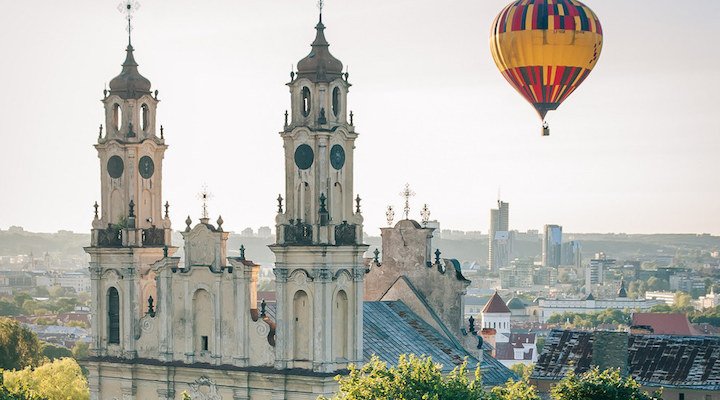 An immediate connotation with Eastern Europe is all of the hot male models (Oskaras Ridikas, Justas Jestrumskis and Gediminas Mazelis being a few of our favourites from Lithuania right now). The capital Vilnius, like the other European capitals offers a lot more to see than great abs though, including an abundance of Baroque architecture, culture, and clubbing. This Lithuanian cities is also one of the few in European to allow hot air balloon tours over the city itself.

Due to the current airport renovation in Vilnius until August 18, 2017, hot air balloons are allowed to fly extremely low, offering a unique experience over one of the largest old towns in Europe. This offers an opportunity for the hot air balloons to fly much lower than the usual 800m – 1,000m height in order to accommodate air traffic.

Hot air balloons usually fly in April – October in Lithuania, during the times of the day when the wind is favourable. The total time with the preparation is about 3-4 hours, with approximately one hour in the air. One balloon accommodates between 4 to 8 people. After the flight, everyone is invited to celebrate with champagne.

Hot air balloon flights can be arranged in other parts of Lithuania, but the most impressive ones are across Vilnius old town or Trakai Castle. To book a hot air balloon tour, get in touch directly with Vilnius in Love tour company,

For examples of imagery captured of Lithuania from hot air balloon rides watch the video below of Unseen Lithuania, by photographer Marius Jovaisa.