Throughout 2015 – when I first started thinking about A Queer Revue! – I made sure to keep a keen eye on the goings-on at the Royal Vauxhall Tavern. Doyenne of South London, the oldest surviving LGBT venue across the river, present-day home to Duckie and historically to hundreds of LGBT gatherings, the RVT has been under threat of closure in the unprecedented slash-and-burn policy of the capital’s current ‘regeneration’.

The spirit of the building itself is an integral part of the city’s queer heritage. It was opened in 1863 and was home to music hall performances from the beginning, slowly morphing into a recognisably gay destination after the Second World War. Drag queens would host and perform on the bar and eventually all the best LGBT performers would pass through its doors, from Freddie Mercury to Lily Savage, who performed there regularly for the best part of a decade.

When Band on the Wall back home in Manchester approached me to host an LGBT event, I immediately thought of the Royal Vauxhall Tavern. Opening in 1862 – one year before the RVT – what we now know as Band on the Wall began life as The George & Dragon pub – a thriving mecca for the bustling urban life that was then focussed around Ancoats and Smithfield Market.

Over the years the venue became known for its live music. A stage that was erected halfway up one wall of the venue begat the nickname ‘Band on the Wall’, which eventually stuck as the venue’s official title. During the Second World War, the hardy musicians would often play right on through the frequent air raid warnings for the bevy of drinkers and dancers below.

Just as with the RVT, things took a slightly queer turn in the years after the war. By the late 1950s, just as the building’s Swan Street location was falling into decline, drag acts like Diamond Lil and Neville St Claire were popular performers at Band on the Wall. A history of showgirls and servicemen, rowdy wartime entertainment and drag, even the location of the venue at the crumbling fringes of the city, form a tantalising and inspiring feeling of hidden queer history.

Revue (noun): An entertainment with music, dance, humour and performance…

For some time I had in the back of my mind an event that would be equal parts Duckie and Club Brenda, two of my favourite parties of all time.

I wanted an event where you could rely on great music and also see a range of cabaret-style performances, somewhere you could dance and see contemporary dance, a place for debauchery and for artistic queer folk to gather. With an actual stage, viewing balconies, two bars, state of the art lights and arguably the best soundsystem in town – and all housed in a Victorian boozer – Band on the Wall was the place to do it.

Our first event took place in October last year. Guest DJs were Rod Connolly from Bollox and Danny Olsson-Lane from Cha Cha Boudoir. I also represented on the decks as Off The Hook.

We hosted astounding drag performances from Anna Phylactic, and Rudy Razz and Lill. We had original dance pieces from Joshua Hubbard, Yandass from the FlexN crew (made famous at Manchester International Festival) and Tom Kuzniar. Vada’s own Adam ‘Beyoncé’ Lowe gave live poetry readings as ‘The Telephone Poet’ in the beautiful adjoining Picturehouse Bar, where we screened queer pop videos and RuPaul audition tapes from the Manchester Queens.

270 people came, saw, laughed and danced – some even fell over. Our next event will take place on Friday 5 February and we’re extra excited because this year’s Queer Contact, Manchester’s annual explosion of Queer culture, has asked us to be their official launch weekend after-party. So, we are an official Queer Contact event! It’s a tremendous honour for only our second outing, and it really means people are supporting what we’re about.

Because it’s a special party we’ve gone all out with the programming. Performing onstage will be Dublin’s radical musical faerie Stefan Fae, making his Manchester debut, plus local performance artist Marilyn Misandry; more contemporary dance from Joshua Hubbard; and ‘Dragapella’, the singing contest for queens with a real voice.

Award-winning poet Cheryl Martin will be this month’s ‘Telephone Poet’ and our special guest hostess is trans performance artiste and scene goddess, Grace Oni Smith. And all for £6 – that’s practically Victorian prices…

We hope we can tempt you into the far reaches of the Northern Quarter to reclaim some of the city’s queer heritage with style, panache, art and cocktails. Welcome to A Queer Revue! 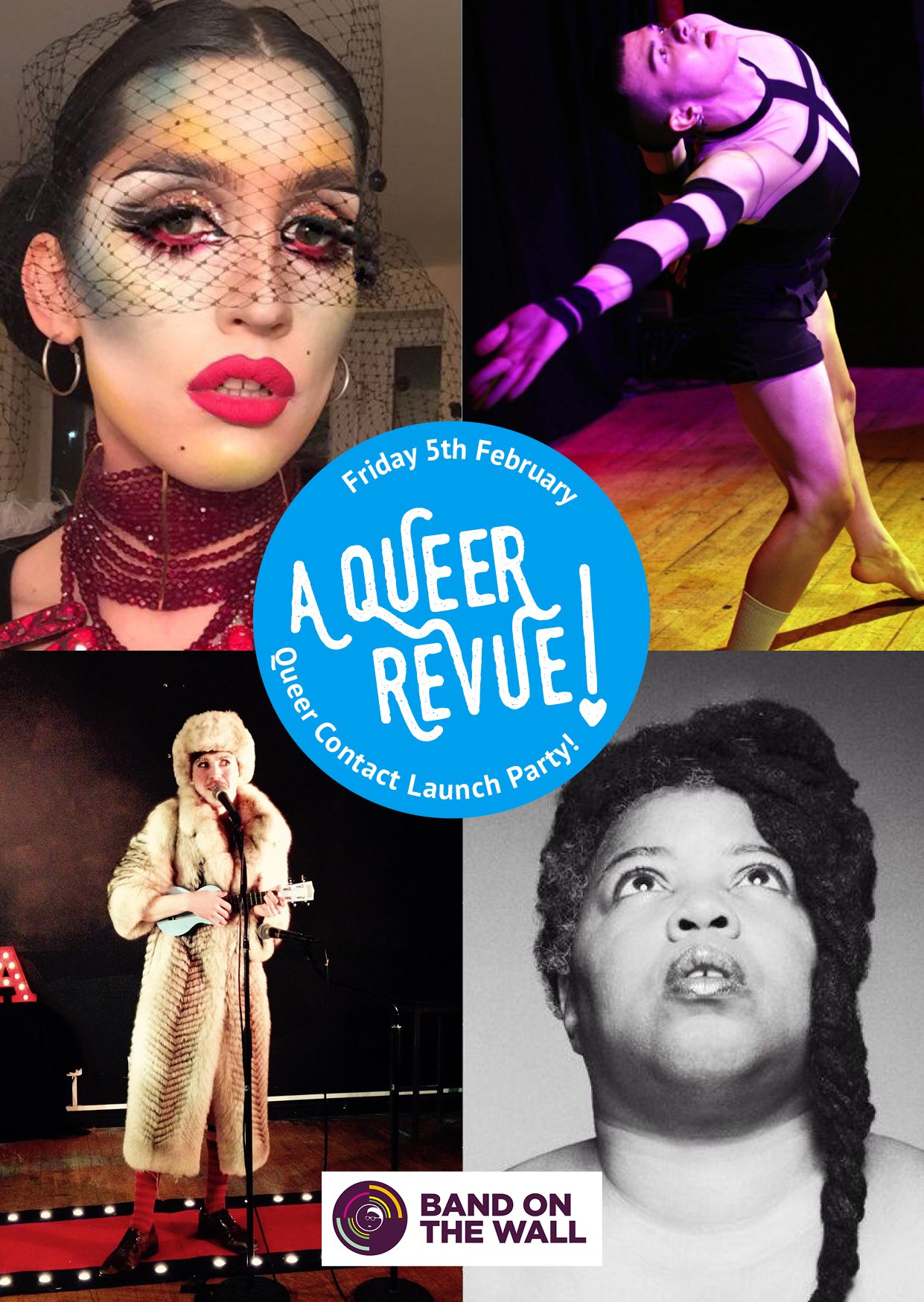