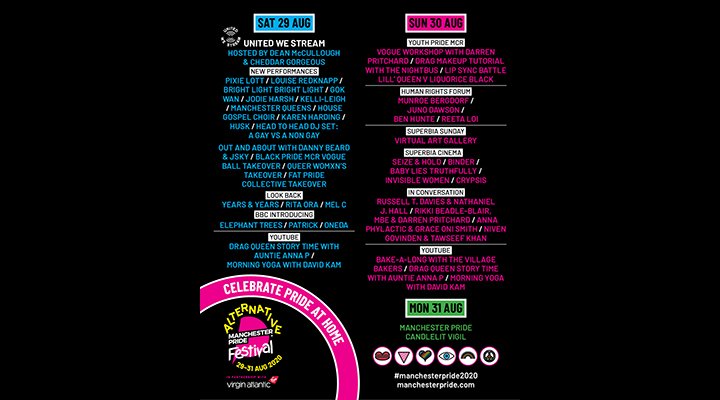 From yoga and drag artists to new and archive performances, the LGBTQ+ charity has curated a programme of content to keep Greater Manchester entertained for three days over this coming bank holiday weekend.

Because of the pandemic and the increased restrictions on social gatherings in place across many of the 10 boroughs of Greater Manchester, the charity will be holding no physical events at all. It is instead delivering three days of online content in the form of the Alternative Manchester Pride Festival, helping everyone to celebrate Pride safely – from the comfort of their own home.

Content will be broadcast exclusively via United We Stream GM and YouTube between 10am and 1am on Saturday and Sunday, followed by a virtual Candlelit Vigil on Monday evening to close the festival.

Each day will kick off with Drag Queen Storytime with Drag S.O.S. star Anna Phlyactic and a live yoga class on the Manchester Pride YouTube channel.

James Barr and Dan Hudson from hit podcast A Gay And A Non Gay will perform a head-to-head DJ set and will also record a live episode over the weekend.

The infamous Manchester Queens, led by Drag S.O.S. star Cheddar Gorgeous, have recorded a brand new drag show to be screened on Saturday, plus there will be a Black Pride MCR vogue takeover, queer womxn’s takeover DJ set and body positivity pride collective Fat Pride will host a takeover DJ set before Gaydio hosts the After Party.

The show will also be dotted with highlights from archive performances from past years’ Manchester Pride Festivals and will include shows from Years & Years, Melanie C and Rita Ora.

The charity will set up a live studio in the Bungalow at KAMPUS – the new garden neighbourhood being developed by HBD and Capital & Centric next to Canal Street – where Gaydio Breakfast show presenter Dean McCullogh will welcome guests including Danny Beard and Cheddar Gorgeous to record live links and bring together the content throughout the day. An ex-security cabin on stilts, the Bungalow was opened as a flexible event space earlier this year and looks out over the Gay Village.

Danny Beard and JSky will be visiting homes across the region to brighten up front gardens and entertain LGBTQ+ people outside their homes.

Radio fans can check out a virtual celebration of Manchester Pride at 6pm Saturday on BBC Radio Manchester with weather idol Owain Wyn Evans. The show will feature a selection of LGBTQ+ faces discussing their memories of prides gone by with music in mind.

Manchester Pride CEO Mark Fletcher said, ‘This has been a very strange year both for us and the LGBTQ+ people that we exist to support. It was so important to me and my team that we delivered an LGBTQ+ celebration that we could all be proud of and I think this programme does just that.

‘With fantastic new performances from many of our favourite artists including some of the very best talent Manchester’s LGBTQ+ communities have to offer the weekend promises something for everyone. Whilst we’re not able to come together for any physical events this year, It’s been great working with the team at United We Stream to set up our very own studio in KAMPUS so that our heart remains Manchester’s Gay Village.’

Sacha Lord, Night Time Economy Adviser for Greater Manchester, says, ‘Pride is a special time of year for everyone across Greater Manchester, and although we can’t all celebrate with each other physically, we stand together more than ever to celebrate the LGBTQ+ community and the fight for equality.

‘Manchester Pride has created an incredible online programme for this year’s festival to help everyone across the city celebrate Pride from home.

‘I’d like to thank all the artists and performers taking part in this year’s Alternative Manchester Pride Festival, and the teams at Manchester Pride and United We Stream GM who are working behind the scenes to ensure this bank holiday runs smoothly. I look forward to seeing the colour and sounds return to the city at the festival next year.’

Sunday will play host to Youth Pride MCR and Superbia content including films and in conversations with artists including Queer As Folk and Doctor Who creator Russell T Davies.

Every year the candlelit vigil provides a moment of reflection to close Manchester Pride Festival and 2020 will continue this tradition.

9pm on Monday 31 August will see the alternative Candlelit Vigil which will, as always, offer LGBTQ+ people the chance to take a minute to remember those lost to the HIV virus as LGBTQ+ people join together to fight the epidemic worldwide, and the stigma that still exists.

It also provides a space to remember those who are suffering and those who are persecuted, presenting an opportunity to stand together in a united front and recognise the many challenges that are still faced by LGBTQ+ communities, both in the UK and around the world.

As the event will be streamed online the team behind it have devised a number of ways in which LGBTQ+ people can get involved so that they can continue to feel connected to this important moment in the weekend.

Viewers will have two options for viewing – they can watch the event via United We Stream or for a more intimate experience they can join the Zoom screening where they will be able to light a candle, share a message of hope or make a heart as an offering to connect them with the wider communities.

Anyone who wishes to remember someone they have lost or celebrate those who have supported people affected either by the COVID-19 or HIV pandemic is invited to share a photograph in advance to be shown on the night – they can do so by sending it to info@manchesterpride.com.

Mark Fletcher continued, ‘The vigil provides a beautiful and calming moment of reflection after what is always a very hectic celebration. It reminds us of where we have been and sets our intentions for where we are going. For me this was the one event that we would love to have delivered as an actual event if we could but sadly circumstances will not allow it.

‘However we have worked closely with Kate O’Donnell from Trans Creative and theatre producer Nathaniel Hall to produce a virtual experience that we know will bring LGBTQ+ people across Manchester together even though they are sadly apart. I hope to see many candles, hearts and familiar faces as we remember those lost and look to the challenges of the future.’ 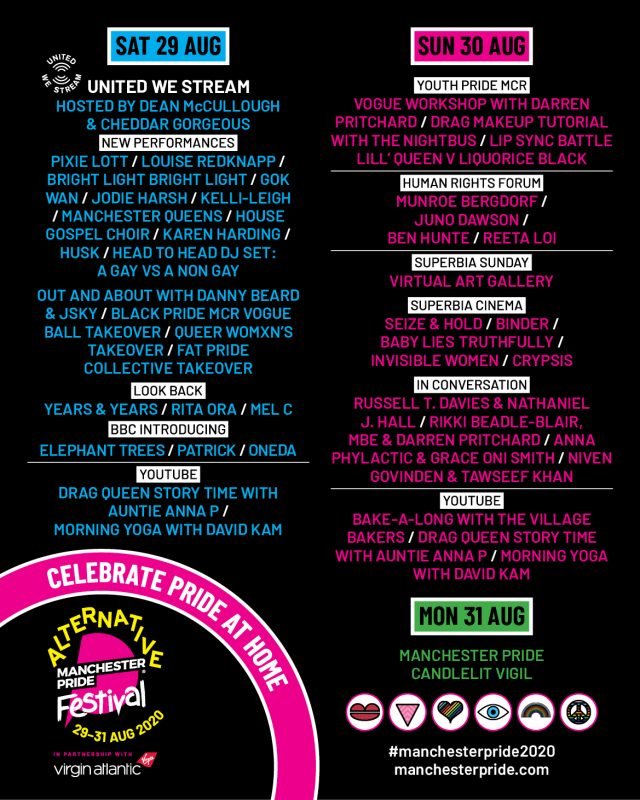