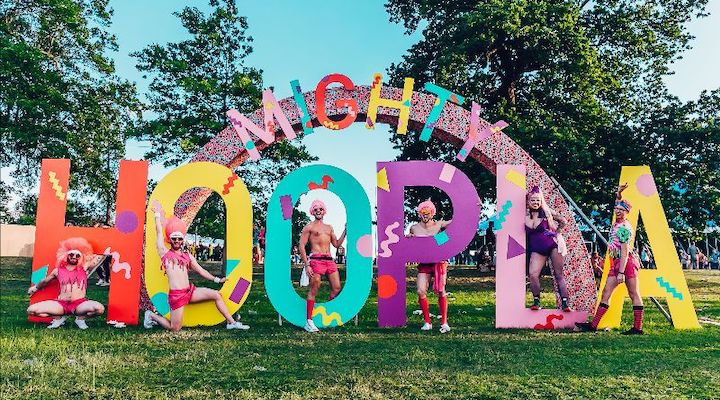 Mighty Hoopla, London’s ultimate pop extravaganza, the festival where however much glitter you wear, there will always be someone wearing more, returns for its 5th year.

Whilst tickets have been available for some time, this second wave of announcements adds some excitement to the line-up with several fierce women. First to add to the increasing list of acts is Geordie pop-sensation Cheryl. Having risen to fame in one of biggest girl groups of the 21st century, Cheryl has since gone on to release five number-one singles in the UK – the first British female solo artist to achieve this feat. Revellers at Mighty Hoopla can expect to hear smash hits ‘Fight for This Love’, ‘Call My Name’ and ‘Crazy Stupid Love’ in a pop-tastic set that’s sure to blow their military hats off.

The next new name to announce is Grammy-award-winning rapper Eve. This multi-talented rapper and famous paw-print tattoo owner will also take to the main stage for the extravaganza. With chart successes including ‘Let Me Blow Ya Mind’, ‘Who’s That Girl’ and ‘Gangsta Lovin’, as well as collaborations with Missy Elliot, Gwen Stefani and Kelly Rowland, Hoopla will be the raptress’s first UK performance for seven years!

Further additions to the line-up include

This new wave of acts join some of pop’s biggest names, from the nostalgic to the new, including Anastacia, Natasha Bedingfield, Atomic Kitten, Jimmy Sommerville, Gabrielle, Allie X, Sink The Pink, Guilty Pleasures, The Grand and many more.

Expect more acts to be announced before the summer. And with two brand new stages, Mighty Hoopla 2020 promises to be the biggest and best yet.

Remaining tickets are available from £50 plus booking fee and can be booked at mightyhoopla.com.