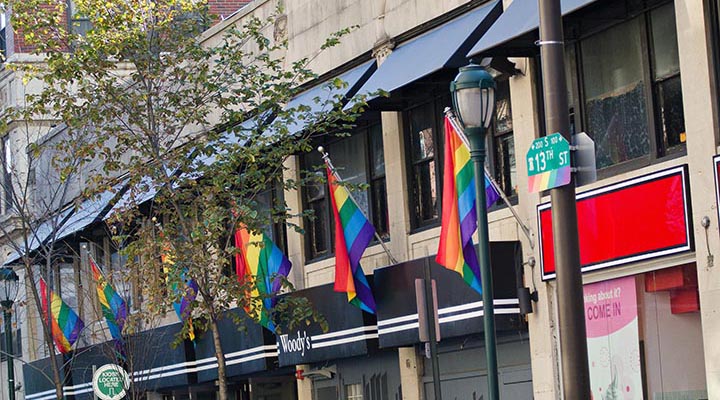 Philadelphia is gearing up to celebrate the world’s largest National Coming Out Day on 7 October 2018 at Outfest.

Also known as ‘The City of Brotherly Love and Sisterly Affection’, the East Coast city of Philadelphia is one of America’s most LGBT-friendly cities. The city’s popular Gayborhood in Center City’s hip Washington Square District, is a bustling hub of LGBT life (like Soho or The Village in the UK), where rainbow crosswalks and street signs have adorned the streets since 2007.

The city boasts an enviable LGBT history. The Stonewall Riots in New York are often attributed with sparking the current LGBT rights movement, but there is a history of LGBT protests prior to this date, including in Philadelphia. Predating the Stonewall Inn Riots by four years, in 1965, local protesters marched in front of Independence Hall on Independence Day (4 July 1965).

The protesters returned each year for the Annual Reminder, which marked the anniversary of the protest, until 4 July 1969 – just days after the Stonewall Inn Riots. Thereafter, the organisers decided to join in solidarity with protesters across the country and focussed, instead, on marking the Stonewall Riots with Christopher Street Liberation Day held on 28 June, 1970.

Philadelphia’s Outfest this year includes a free street party stretching across approximately 10 square blocks of the Gayborhood. The festival will include drag shows, games, music and bar crawls, and is expected to include over 120 vendors plus a food court at the intersection of 12th and Spruce Streets. The festival’s main stage will host live entertainment throughout the day, including high heel races and DJ sets.

LGBT travellers can also visit historic and significant sites in Philadelphia, including the Philly AIDS Thrift at Giovanni’s Room, which donates its proceeds to local organisations involved in the fight against HIV and AIDS. The city is also home to Barbara Gittings Gay & Lesbian Collection, which is the largest dedicated LGBT public library collection east of the San Francisco Library.

Outfest is free to attend and will take place from 12-6pm on 7 October 2018. For more information on Outfest, visit phillygaypride.org.