On Sunday 12 April, the RuPaul’s Drag Race queens continued their takeover of Manchester’s clubbing scene for the grand Battle of the Seasons Condragulations Tour at The Ritz. This was perhaps the most RPDR queens the city has seen all at once but the last year has seen a marked increase in the number of acts from that show that have taken the time to perform here.

These days you can’t swing your knock-off Gucci handbag without seeing some fabulous American pageant queen sashaying down Canal Street, or some darkly fabulous alt-queen popping for a quick drink on Bloom Street – and we wouldn’t have it any other way!

Thankfully, it’s not set to end any time soon, and the Drag Race fun continues as the #AAAGirls hit Sackville Gardens for the free Village People Weekend (1-3 May 2015), with future appearances by major queens at Holy Trannity throughout the year.

Battle of the Seasons – Recap

Part of the 2015 Battle of the Seasons Condragulations Tour, the event two weeks ago saw Ivy Winters, Jinkx Monsoon, Adore Delano, Manila Luzon, Pandora Boxx, Alaska 5000, Sharon Needles and more take over The Ritz for an evening of decadent camp and fishy talent. Everybody who was anybody was there – with Instagram literally abuzz with snaps of local gays with their favourite drag idols.

The event itself was filled to the rafters, and the show didn’t disappoint.

The ante was upped, the standard set, and the tone lowered. Each and every queen had to bring her A-game – and that’s precisely what we got.

Sharon Needles – never one to disappoint – arrived in a coffin, no less, making much of her goth queen image.

Meanwhile, Ivy Winters werqed that stage! She changed her costume no less than six times mid-number, and then topped it all off with a spectacular appearance with butterfly wings and – wait for it – stilts!

Michelle Visage, who last year appeared at the Pop Curious? event The Hunty Games and then entered the Big Brother House, was also on hand to judge the Snatch Game. As if this weren’t enough, she also sang two solo numbers (proving herself every bit the talented vocalist) and performed with both Jinkx and Alaska.

We especially appreciated the efforts by Ms Boxx – I mean, it’s a wonderful nod to British culture! Although Sharon Needles as Joan was, of course, spectacular. You can make up your own mind about who should’ve won from the video below:

We’d have loved to have seen more of Adore Delano, simply because we at Vada love her, but we got so much from these girls it’s not really fair to have expected more. The audience definitely got enough bang for their buck, that’s for sure!

The fabulous show was rounded off with a surprise visitation from last year’s winner – the controversial Bianca Del Rio. This got the biggest cheer of the night, proving that the foul-mouthed, comedy queen is still just as popular as ever with the viewers.

Coming this weekend, The Village People Weekend is the second such event – this year bringing the American Apparel Ad Girls to the stage. The Village People Weekend is a 100% free LGBT event, set up as an alternative to the £20-or-so pricetag for Manchester Pride’s Big Weekend. Bucket money goes to charity and with it falling on a bank holiday, you don’t even need to worry about your hangover on Monday morning.

The #AAAGirls comprise Alaska 5000, Courtney Act and Willam, who are making their first UK appearance together at the outdoor festival. There’s a suggested donation of £3 to enter the Sackville Gardens enclosure, with all the funds raised on the door going to charity.

There’s also an afterparty back at AXM after their Sunday performance.

The next event to see any of the RPDR posse after The Village People Weekend is Holy Trannity Presents Raja.

Later that month, The Max Collective will also take to the Holy Trannity stage from 9.30pm on Sunday 28 June. Ticket prices start at £20 each. 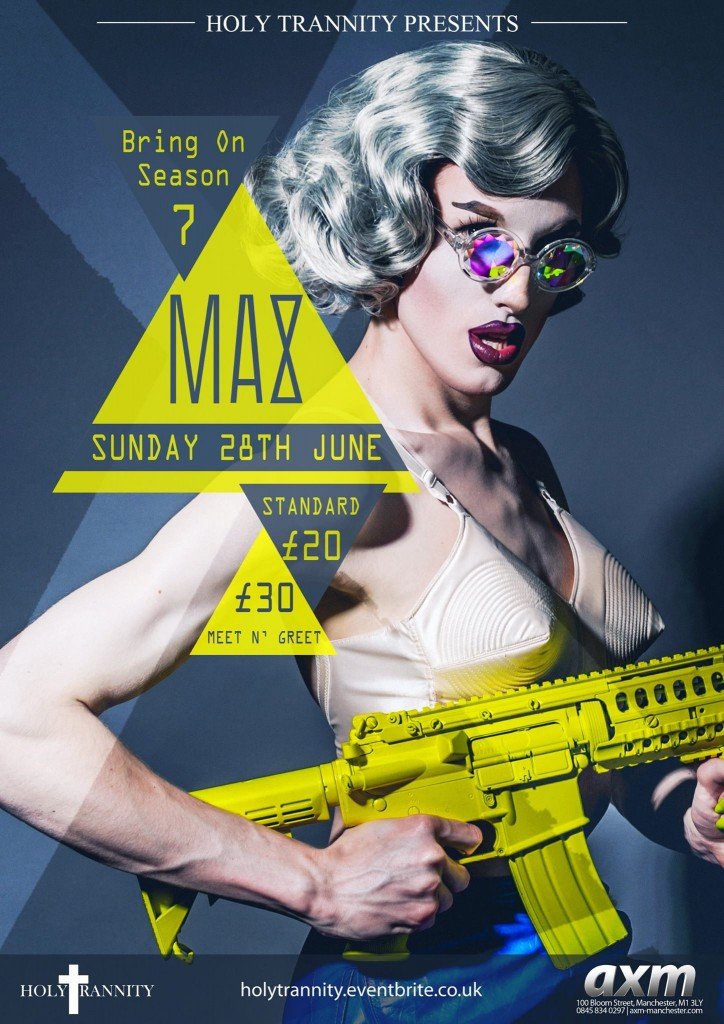