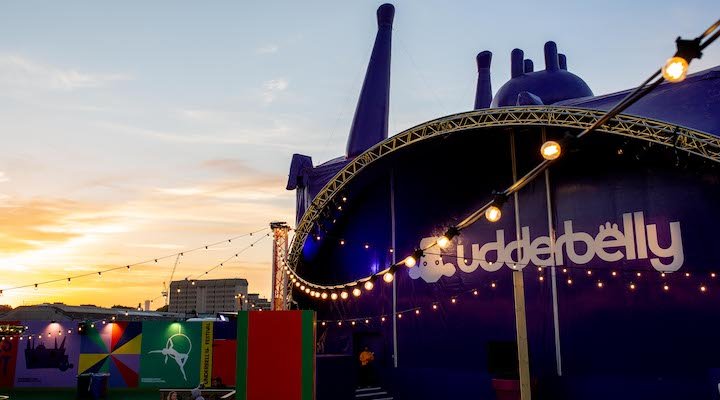 Underbelly Festival takes place outdoors so offers a space to hang out, eat, drink, and of course catch a show. Events include a family show (Mama G’s Story Time Roadshow, by a panto dame), comedy from Laura Davis, Eme Essien, Michelle Shaughnessy, or Patrick McPherson. The main theatrical show is of course Unfortunate: The Untold Story of Ursula the Sea Witch.

Unfortunate: The Untold Story of Ursula the Sea Witch

This critically acclaimed hit parody musical ‘Unfortunate’ splashed into Earls Court this summer for its London premiere at Underbelly Festival and running until mid-July. Guests join everyone’s favourite Disney Diva, Ursula, as she gives her backstory on what really happened all those years ago under the sea. With an original hot pop soundtrack and trademark filthy humour, it’s a tell-all tale of sex, sorcery and suckers.

The audience can expect camp to the max. We imagined that during rehearsals the whole cast repeatedly got that typical judges critique from Ru Paul’s drag race to making every moment and character component as big as possible. Ursula pulls this off tremendously throughout, though some of the side characters did over-do the camp factor at times. That said, the small cast each play a number of characters, the logistics of pulling off this number is impressive.

Drinks are available from Tarquin’s – one of the successful (and award winning) gin distilleries coming out of Cornwall, which launched in 2012 in the burgeoning gin boom. Now, in 2022 they have partnered with Underbelly. As fans of mother’s ruin, we were particularly taken by the Rhubarb & raspberry gin and slimline tonic. And if there’s any available, we recommend trying the limited edition hibiscus and lemon gin too.

Three food trucks provide sustenance, with options from Dal Napoli (pizza), Herd (burgers and fries) and Sea Wise (fish and chips) – whilst the food was delicious, we found the vendors understaff and struggled to serve food quickly. So we recommend putting your food order in when you arrive, allowing plenty of time to eat it before you go on to join the show (as no food is allowed in the show tent).

For more information and to book tickets (priced from £23.50), visit underbellyfestival.com.