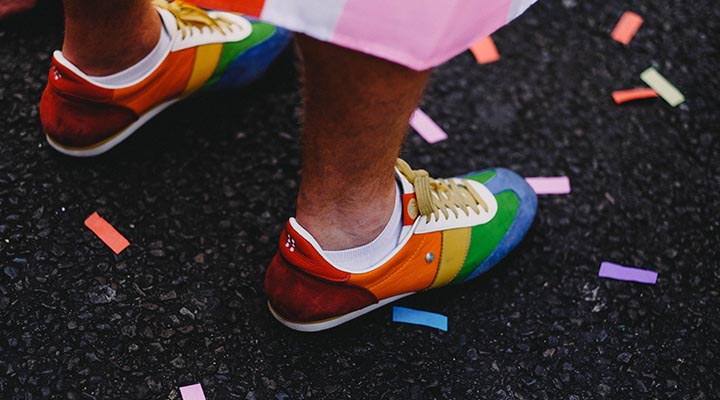 As the LGBT community slowly gets the liberation it deserves worldwide, pride is getting bigger and better year on year. If you fancy side-stepping your home town celebrations for something more international this year, here’s Vada’s 2015 Pride Round-up!

The pride-loving party-animals of Amsterdam do things a little differently, hopping aboard canal boats and gliding down its waterways. If you’re not a member of the aristocracy and don’t happen to have your own boat lying around, you can support from the side-lines (the bridges are your best bet, but the good spots go early). Or for those for whom 1.30pm is still valuable lie-in time, you can admire the festivities from the hotel window (the organisers have provided this map of the canal ways and hotels in the proximity).

See Vada‘s Top 5 Things to Do at Amsterdam Pride for some handy pointers on where to begin!

The 20th annual Belgian Pride takes place on 16 May 2015. Brussels’ largest LGBT+ event, Belgian Pride draws over over 100,000 revellers to celebrate the end of its pride festival. At the core of Belgian Pride is the fight for equality and civil rights – with last year’s event supported by over 100 measures to address prejudice in all areas of civic life. In 2019, Brussels will also be hosting its pride event at the time of the European elections – particularly important, since Brussels is the heart of the EU.

RELATED ARTICLE  Preview: Cha Cha Boudoir: Back from the Dead!

As the gay capital of the UK, there is nowhere more apt for the wee, dreary isle to hold its annual pride festival. Brighton is a gorgeous little city south of London, nestled against the charming brown shore of the English Channel. Stay a few days while you’re there – the North Laines and The Lanes are two areas crammed with sweet, bunting-adorned shops and cafes that you’ll want to explore.

Much to the distress of locals who were used to a free event in previous years, Brighton Pride is now ticketed, so if you’re planning on getting your strut on during the parade you’ll need to pay up. (And cheaper tickets are running out fast.) Tickets get you into the literature tents, music acts and cabaret performances as well; a whole world of homosexual-themed happiness awaits.

If stripping off on the beach is your idea of hell, the cooler, more intellectual version in Finland’s capital might be more up your street. Held in the beautiful Hekasalmen Park, these pride celebrations kick off with an enormous parade, which invites bands and musicians to participate. Give the organisers a bell if you want to sing while you stomp, so they can ensure there’ll be no Christinas sidling up against Britneys during the walk.

On top of this, there will be talks giving help and advice on gay-centric topics such as adoption for same sex couples, comedy tents (you might have to scratch up on your Finnish for those) and picnics. Definitely a walk on the quieter side.

RELATED ARTICLE  A History of LGBT Russia - Part I

The usual mania of this bustling city is nothing compared to how its streets look and feel during pride. Though Turkey is largely intolerant in terms of its views on LGBT+ rights and same-sex marriages, same sex relationships are not forbidden by law – meaning no backlash from the authorities. As the largest gay celebration in the Muslim world, Istanbul is achieving quite a feat – attracting tens of thousands of supporters, most of whom show up in full, glorious drag.

Bring your sunglasses so the sheer vibrancy of the rainbow flags and glittering cocktail dresses don’t blind you, and show your support for same sex couples fighting for equality. Then when you’re done, get the hell out of there and head somewhere more relaxing – the coastal town of Alanya is particularly cosmopolitan, has a lot to see and will provide some much-needed respite from the hectic city.

Perhaps the main draw for many scene queens and club kids, the Big Weekend is only one part of Manchester Pride’s ambitious programme – which also includes a month-long fringe festival. A ticket to The Big Weekend gives you access to the main arena, Sackville Gardens, the lifestyle expo, Village markets and dance arena. There have been celebrities such as MKS and Kelis gracing the stage in recent years – so The Big Weekender is always a big crowd-pleaser.

Meanwhile, there is always plenty of booze, some solid festival grub and always a little glimmer of sunshine. While the rain can sometimes force revellers indoors, it never dampens their spirits. Night-times, of course, are always popular, with venues going all out to put on their very best and the party-goers attending in force.

If you want to make a real holiday of it, head to Gran Canaria for a week long banana-hammock festival on the beach. Maspalomas is a seven day beach binge and party, where men and women strip down, bronze up and look cool by the pool. Party tickets are already on sale, and make sure you bring your skimpiest gear and a decent bout of insomnia; this is one week-long DJ-inspired dance fest.

The adoption of same-sex marriages three years ago was a great success for this liberal state, and since then pride has taken on a new ‘can-do’ atmosphere. Events differ across the five different boroughs, but make sure you’re there in your glad-rags for the main parade in Manhattan, and the lower-key twilight procession in Brooklyn (for the romantics). If you’re bringing the family along then the huge, outdoor family movie nights are a must-see!

Anyone who has sobbed over Milk will well know how Harvey Milk paved the way for being loud and proud in this wonderfully out there city – where Pride celebrations are some of the biggest and most vibrant around.

Only two days of fun to be had here, all of which kicks off at an unholy 10:30 in the morning, so prepare yourself for a short, sharp burst of fabulousness. Once the street marching is over (check this map for more details on the direction) the partying begins, with enormous stages and even bigger stars such as Lady Gaga and the Backstreet Boys (though we can’t promise you these 90s beauties will be there in 2015).

Been there, done that? Which one tops the charts for best pride parade? Let us know below!