Here at Vada we are always on the lookout for something fabulous, footloose and fancy free. Or in fact anything with glitter that will allure eye candy. Across the capital there are an abundance of drag events and club nights planned. This is our pick of the bunch, here is Vada’s top 5 LGBT events in London during the May Bank Holiday Weekend.

On 26 May, Vauxhall Tavern are hosting Push The Button’s Night of 1,000 Britneys – a tribute befitting of the Holy Spearit, the one who was BORN to make us happy. So dust off that jade green brolly, shave your head and leave the kids with a big bag of Cheetos – IT’S BRITNEY, BITCH.

They promise an EXCESSIVE amount of Britney on the radar, as well as playing the usual HITS: from Robyn & Gaga to Aqua & Schlager, PUSH THE BUTTON is a celebration of the last 2 decades of POP! They’ll be playing ALL THE HITS: synths, guitars, keytars, drum-machines, girl bands, boy bands, impossible princesses – it’s a glamophonic, electronic, d-d-disco baby! If you’ve ever been to Heaven – this is twice as nice.

Tickets available for purchase at eventbrite.co.uk.

The Power of Three – The Two Brewers

This Spring Bank Holiday Sunday, the Two Brewers will be open until 4am in both rooms. They are hosting The Power of Three: Miss Jason (6:30pm), Mary Mac (8:30pm) and Sandra at 11pm. DJs Moto Blanco (Bobby Blanco & Miki Moto) & Chris Brogan in the Club Bar plus Dj Demon in the Cabaret Bar 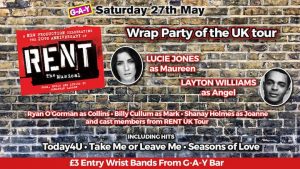 G-A-Y is celebrating the end of the sell-out tour of RENT The Musical on 27 May. The Legendary, Multi-Award Winning & Ground Breaking Musical tells the thrilling story of impoverished young artists struggling to survive in New York’s City’s East Village under the shadow of HIV & AIDS. RENT features unforgettable songs including Take Me or Leave Me & La Vie Boheme, and of course expect one of those special moments when the cast including Lucie Jones and Layton Williams perform Seasons of Love.

Hidden away in the heart London’s hectic west end is a very Secret Garden. A walled paradise of temptation and hedonistic indulgence. Deep inside this utopian wonderland is a blissful community who go by the name of Little Gay Brother. For one night only these bohemian creatures will be inviting you to enter the promised land…

Bank Holiday Sunday (28 May) at Heaven welcomes Little Gay Brother back for another night of carnage as we present Secret Garden of Eden. In hot anticipation for our final voyage to The Secret Garden Party, the Little Gay Brother crew will be bringing all the vibes of the garden to London’s west end. Prepare to be seduced by the serpent…and to taste the forbidden fruit.

Whether you’re an Adam, Madam, Eve or Steve, dress for a journey into paradise. With shows all night long from Little Gay Brother. DJs for the night are Hannah Holland, Paul Heron, Terry Vietheer, DJ Frank.co, The Head Gardener, and Lewis G Burton.

Advance tickets are priced at £6 and can be bought online at fatsoma.com. 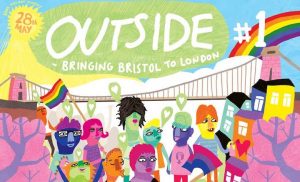 Outside, a celebration of all things queer from cities around the UK and beyond, kicks off with a bang for the last bank holiday on 28 May. The party at Dalston Superstore will focus on bringing a slice of the Bristol LGBT scene right to your doorstep In London. Headed down the M4 for this extra special party are DJs and drag superstars such as Don’t Tell Your Moth, B.Please, Rhythm Sister, Dis Charge and Brizzle Boi. And of course the music will be as diverse as the city itself, spanning, disco, italo, funk, pop, indie, house, weird midnight gems and even a bit of techno!