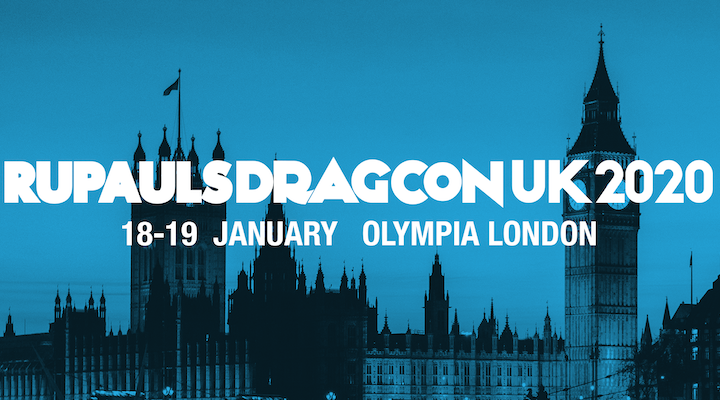 RuPaul’d DragCon UK, presented by World of Wonder, comes to the UK in January 2020 in Olympia London and tickets are on sale now.

Following the success of RuPaul’s Drag Race UK on BBC Three and with over 100,000 visitors attending both the LA and NYC conventions in 2019, RuPaul’s DragCon is set to sashay across the pond for the first time ever next month.

DragCon is known for being the ‘World’s Largest Celebration of Drag Culture’ and DragCon UK is expected to be no different. Get ready for a weekend full of art, drag and all things pop culture, as RuPaul Charles, Michelle Visage, the Brit Crew and all the Queens we know and love, death drop to center stage at Olympia London on 18th and 19th January 2020.

Visitors can expect to see the entire cast of RuPaul’s Drag Race UK – including the newly crowned winner The Vivienne and runners-ups Divina De Campo and Baga Chipz. To mark the official opening of DragCon UK witness RuPaul, alongside his Queens, cut the ribbon and announce that RuPaul’s DragCon UK is officially open. Then, don’t miss out on one of the must-see events of the convention, The Queen’s Walk, which sees the queens make their entrance and strut down the famous pink carpet. Other Queens that have been confirmed include:

Alongside the glorious number of talent at DragCon UK, the two-day convention promises to bring queer pop culture, activism and art to the forefront with pop-ups from some of the world’s leading LGBTQ+ fashion and makeup brands. If you are interested in learning more about drag culture, there are a range of panel discussions on offer with your favourite queens and celebs – with topics ranging from the history of drag, LGBTQ+ rights, fashion, make-up and more. Then, head on over to the main stage and watch show-stopping performances from special guests or unleash your inner Queen and participate in one of the contests.

Full line up information, tickets and VIP packages are available at uk.rupaulsdragcon.com.