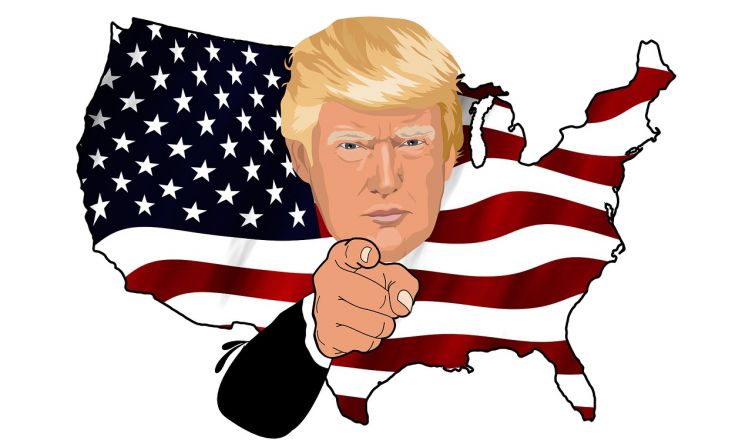 For politicos like me it has been a frantic year, having to look in one direction at one story and then quickly divert our attention to another story. By the time we sit down to analyse and write about it the story has often changed and becomes a whole new beast in itself.

From the WTF moments to truly groundbreaking history, 2018 has certainly been an upheaval.

One man has largely dominated U.S. politics – and perhaps rightly so. Many thought Trump wouldn’t last a year, let alone two, and his policies have continued to divide the world.

With sackings and resignations from his cabinet and staff, Trump never ceases to impress. In his own words he’s “Delivering promises he never made.”

It’s two years in and he still can’t escape the shadow of the Russian interference allegations. With his former national security adviser General Flynn and his former attorney Michael Cohen now making deals with the investigators, it would appear things are beginning to close in on the President – with Robert Muller’s report due in 2019.

Trump continues with his reckless policies, causing yet another government shutdown. The issues were numerous: funding of the border wall he said Mexico would be paying; the withdrawal of US troops from Syria, allegedly against advice from his defence team; and withdrawal from the Paris climate agreement and the Obama deal with Iran.

Trump further jeopardised peace in the Middle East by recognising Jerusalem as the capital of Israel and moving the U.S. embassy there, despite protest from the UN. To top the year off, Trump has started a trade war with China.

Trump supporters have also allegedly sent bombs to senior Democrats in Congress, the Obamas, the Clintons, George Soros and CNN.

Trump has also successfully manged to fill judicial benches with conservative judges. Things came to a head when he backed Judge Brett Kavanaugh to fill a Supreme Court vacancy. Another conservative on the Supreme Court would tip the balance, which worried Democrats.

Things then got really heated when Judge Kavanaugh was accused of sexual assault in high school. One of his alleged victims, Professor Christine Blasey Ford, came forward and was questioned by the Senate Committee overseeing the vetting of Kavanaugh.

Trump’s nomination divided America with protests held to try and stop the nomination. Kavanaugh was also questioned by the Senate Committee on the alleged assault.

The one redeeming feature of this year, some would argue, is that after the mid-term elections the Democrats retook the House of Representatives – which means they can stall Trump’s legislative agenda for the next two years. They weren’t able to regain control of the Senate, which saw a one seat increase for Trump.

With the economy doing well, despite daily fluctuations in the markets and unemployment at a low, Trump has that on his side to help going into the early stages of the 2020 presidential election.

Democratic candidates are starting to set up exploratory committees – with the likes of former Vice President Joe Biden, Massachusetts Senator Elizabeth Warren and rising star from the mid-terms, former Texas Congressman Beteo O’Rourke thought to be considering a run.

On 12 June in Singapore, the leaders of these two nations created a first. Never before had the current leaders of America and the People’s Democratic Republic of Korea (PDRK or North Korea) met. The two nations had been at war between 1950-3 when the US came to the aid of South Korea.

The war has not officially ended but the two Koreas were separated along the 38th parallel.

North Korea has continued to pursue a chemical weapons programme in order to defend itself against the West. Testing of their missiles would lead to an increase in tensions in the region with South Korea and Japan feeling particularly threatened.

Sanctions came and got added to each time North Korea tested missiles or violated treaties. Under the Obama administration, a policy of “Strategic Patience” was adopted whereby North Korean provocations wouldn’t be “rewarded” with Presidential attention.

The Trump administration took a hard line with the PDRK but stated they were open to dialogue. In true Trump style, after North Korea successfully tested their intercontinental ballistic missile, he said in a press conference North Korea would be met with “fire, fury and frankly power, the likes the world had never seen before.”

This, of course, didn’t alleviate the situation – with North Korea responding that they would fire missiles at the US territory of Guam. More and more missile tests were carried out and more and more sanctions were placed on North Korea with their close allies China seemingly getting frustrated.

After North Korea tested Hwasong-15 – a missile North Korea said was capable of carrying a “super heavy nuclear warhead” capable of hitting anywhere in mainland America – Kim Jong-Un said they had “finally realised the great historic cause of completing the state nuclear force”.

In neighbouring South Korea, a new President was elected. Moon Jae-in sought to adopt a friendlier approach to the North and invited them to partake in the Winter Olympics to be held in Peyongchang.

Following the successful Olympics, which saw North and South Korea march under one flag and compete together in the women’s ice hockey, President Moon and Kim Jong-Un met at the 38th parallel where they both took it in turns to cross the well defended border.

Talks between officials from South Korea, Japan, China, North Korea and the US took place in preparation for a summit. This led to Kim Jong-Un’s first known international visit in Beijing with Premier Xi Jinping.

Out of this summit came a statement from China that North Korea was ready to commit to denuclearisation. Following this, the two Koreas held a summit just inside North Korea at Peace House. The leaders both agreed to end the war by the end of the year and commit to a nuclear-free peninsula.

In the background talks, arrangements were being made for a summit with the US and North Korea. The North Korean and US summit was in jeopardy when US Vice President Mike Pence made comments that North Korea would end up like Libya if they didn’t dismantle their nuclear weapons and make a deal, echoing comments from Trump.

This referred to the leader of Libya being killed after NATO airstrikes assisted rebels. Libya ended up as a failed state. However, Libya had already given up its weapons prior to the intervention which lead North Korean Foreign Minister Choe Son-hui to refer to Pence’s comments as “ignorant and stupid”.

Trump cancelled the summit to the shock of South Korea. The North continued to express a willingness to sit down face-to-face. The following day Trump announced the summit would go ahead.

Eventually at 9:05 on 12 June, at the Capella Hotel in Singapore, the leaders of North Korea and the US met and greeted each other with a 12-second long handshake (yes they really did time this). The delegations continued with bilateral talks and a working lunch.

Trump told reporters the meeting was “very, very good”. The day and indeed the summit concluded with the joint signing of an agreement that committed both nations to establish new relations with a desire for peace and prosperity in the peninsula, to continue work to denuclearise the area and to recover prisoner of war remains.

Whilst historic the debate raged on as to who got the better deal, critics argued the agreement was too vague to mean anything significant. Optimists hoped this would lead to a peace agreement and actions towards a peaceful peninsula.

Some argued Trump and Kim should receive the Nobel Peace prize for their actions. Others argued it should be Kim and Moon. Pundits were torn over whether Trump came off better or if Kim finally got the international recognition he and the North Koreans had been craving by standing side by side with the President of America.

Only time will tell how significant this summit will be, but America and North Korea have plans for a second summit in 2019. Could we see the leader of North Korea in the Oval office? Or will we see the President of America in Pyeongyang? More likely than not it would be another neutral location.

In America, President Trump had sought to appoint Judge Brett Kavanaugh to the Supreme Court. During his confirmation hearings a number of accusations started to swirl that Kavanaugh had assaulted women whilst he was in high school.

One of his alleged victims went public: psychology professor Christine Blasey Ford. She faced the Senate Judiciary Committee in an act she described as her “civic duty”. Americans were glued to the hearings as Blasey Ford recounted the night she alleges Judge Kavanaugh assaulted her.

The Republican Senators on the committee did not question Blasey Ford directly but through Rachel Mitchell, a prosecutor. The Democratic Senators questioned Blasey Ford themselves.

Whilst Mitchell said from a proprietorial point of view she would not bring the case, owing to some gaps and inconsistencies, psychological and trauma experts lined up to explain how traumatic memories are often unclear and incomplete.

Outside of the Senate hearings, Trump mocked the gaps in Blasey Ford’s memory at a rally. Senator Jeff Flake and the Senate Judiciary Committee requested the FBI investigate the allegations. President Trump granted this request but with restrictions.

NBC reported that Blasey Ford and dozens of other witnesses were not interviewed. The report was shown privately to the members of the committee and Senators.

Blasey Ford has allegedly received numerous threats after coming forward with the allegations. Since the hearing she has stated she has had to move four time, still retains the services of a private security firm and is unable to resume teaching.

A crowdfunding project has raised around $650,000 to help fund Blasey Ford’s security with any spare being donated to trauma charities.

After votes along party lines Kavanaugh was approved by the committee 11-10 and then by the Senate 50-48.