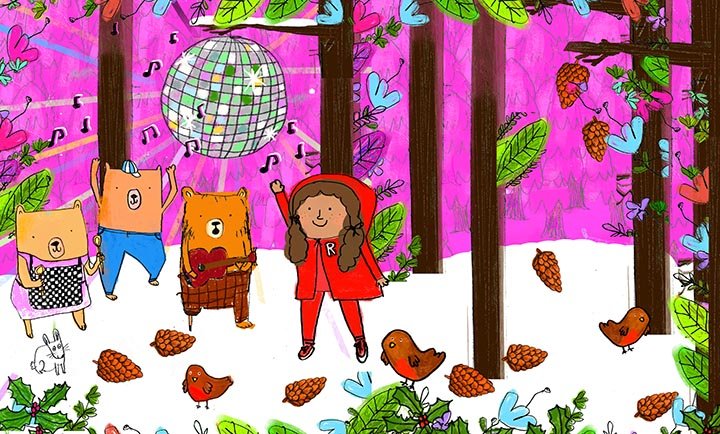 With the festive season looming closer, Manchester Theatre Contact is dusting down its glitter ball and ironing its spandex in preparation for its journey into The Forest of Forgotten Discos!

Running from December 11-23 at the intimate and award-winning Hope Mill Theatre, this year’s Contact family Christmas offering – integrating sign language and visual storytelling into all its performances – puts the FUN into funky for everybody aged 5-105!

There is a mystery in the forest – everyone has forgotten about dancing and bright lights and disco. Even Alexa the virtual assistant from the Amazon Rainforest – who normally knows everything – does not understand why this is the case. That is until 7-year old Red, who is afraid of nothing and nobody, explodes onto the scene. Red thinks that dad’s new girlfriend will ruin Christmas and so has run away from home to make a new life in the forest.

Alexa introduces Red to the three bears who live there: Bear Hug, who is a creaky bear with a secret; Bear Minimum, who has a higgledy-piggledy bedroom she cannot keep clean; and Bear Grills, who just can’t keep his head cool. Red and the bears embark on a journey through the forest and learn to work together – with some help from the audience along the way.

Written by the acclaimed Jackie Hagan – a stand up comedian, playwright and theatre-maker who drinks cut price champagne from her glittery false leg – The Forest of Forgotten Discos! is an inclusive theatrical experience for all ages and all types of families. It has been written and is being staged very much in keeping with Hagan’s aim to create work that celebrates the experiences of people left out of the mainstream. Creative integration of sign language and visual storytelling features in each and every show to enhance its accessibility.

The show is directed by emerging director Nickie Miles- Wildin, who starred in the London 2012 Paralympics Opening Ceremony. She is currently Resident Assistant Director at Manchester Royal Exchange Theatre as part of the Regional Theatre Young Director’s Scheme.

Nickie comments, ‘Having followed the work of Contact for many years, I feel honoured to be working with them on this playful Christmas show. I am really excited about the creative integration of the sign language at each show which we really want to be for everybody – regardless of age, family configuration or background. Working with the very humorous Jackie Hagan means also that rehearsals will be lots of fun.’

Playing the role of Red is Paislie Reid who started her career as a child actress in two seasons of The New Worst Witch (CITV). Sophie Coward – who plays Alexa – trained at the Liverpool Institute of Performing Arts (LIPA) and has toured with Mac’s Arcadian in their BSL integrated Great Odds and performed with Paperfinch Theatre in an immersive twist on The Nutcracker at Theatr Clwyd.

The bear family trio is made up of: Sara Cocker as Bear Hugs, Marcquelle Ward as Bear Grill, and Ali Briggs as Bear Minimum.

Sara Cocker is a former member of Contact’s Young Company. She is also one third of Eggs Collective, whose work includes Get A Round for BBC2’s Performance Live series.

Marcquelle Ward is best known for his role as regular character BB in ITV1’s Britannia High and made his West End debut as Rum Tum Tugger in CATS at the London Palladium in 2015, for which he was nominated for West End Frame’s “Best West End Debut” award.

Ali Briggs aperforms using sign language and lip reading and is an experienced stage and TV actress with credits including Fat Friends, Alphabet Soup and 23 episodes of Coronation Street as Freda.

The Forest of Forgotten Discos! is a fun, heart-warming story that can be enjoyed by everyone this festive season.

As Contact’s permanent home on Oxford Road continues its building transformation, the company is delighted to be concluding its 2018 In the City Part 2 Season at the acclaimed Hope Mill – The Stage’s 2018 Fringe Theatre of the Year.