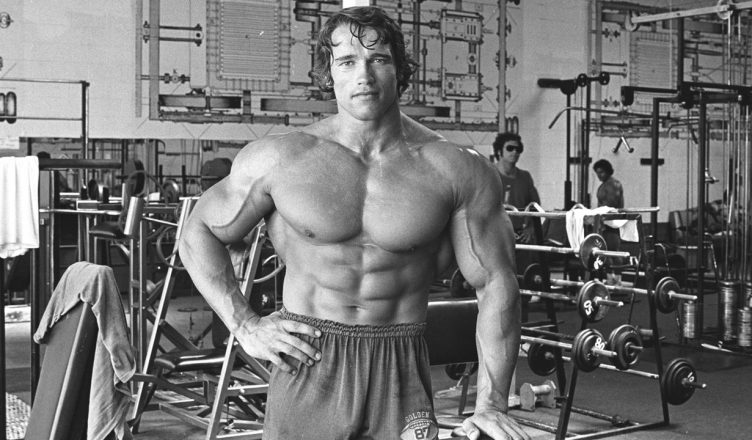 Ash Isaac
I am a contributor of questionable taste, origin and talent. My one claim to fame is that I was born in the same hospital as Cliff Richard. I am still in possession of my soul unlike Sir Cliff who sold his to Samael the Desolate in return for eternal youth and the friendship of Sue Barker.

Picture the scene. A host of tanned, oiled, pumped, self-obsessed, preening narcissists parading themselves around on stage in the hope of fame and recognition. No, not the wrap party for The Only Way is Essex, but the subjects of Pumping Iron, the small independent docudrama that brought the previously niche pastime of body-building into the mainstream and helped launch the career of one of Hollywood’s most enduring action stars.

A critical and box office success on release, Pumping Iron can rightly claim to be a record of cultural significance; an immortal, timeless record of male machismo, braggadocio and swagger as well as the chronicle of one man’s insatiable desire to scale the heights.

The words “Starring Arnold Schwarzenegger” were a novelty way back in 1975 when photojournalist George Butler and cinematographer Robert Fiore documented the build-up to the ‘Mr Olympia’ championship, considered the pinnacle of the professional bodybuilding scene. Schwarzenegger is 28, but already a hulking fish in a small pond. Extroverted, loud and brash, the fresh-faced future governor had already won Mr Olympia five times in a row and was hoping to make it a sixth consecutive triumph before retiring and concentrating on his ultimate goal of becoming President and taking over the world.

Ostensibly the film gives a platform to a wide range of body-builders both amateur and professional, but the reality is that Schwarzenegger dominates the screen from start to finish. In hindsight it’s amusing to watch, but at the time of release audiences must have been wondering as to who this strange, beaming colossus with the stilted accent and chiselled Teutonic features was. When he’s delivering a short discourse on the joys of cumming, (yes, really) the natural reaction is to laugh uncontrollably, but it’s a testament to the sheer animal magnetism and charm of Schwarzenegger that he still manages to both captivate and bemuse in equal measure.

The film juxtaposes Schwarzenegger with his main competitor for the Mr Olympia title: the shy, almost reticent Lou Ferrigno (who would go on to be The Incredible Hulk) and their intense rivalry and contrasting styles form the centrepiece of the film. While both of them spend endless hours in the gym in preparation for the competition, Ferrigno spends his downtime with his friends and family while Schwarzenegger prances about in the ocean, naps on the beach, participates in photo-shoots and yes, indulges in horseplay with the assortment of beautiful women in tow.

Pumping Iron captures every fasciculation, every twitch, every bead of sweat, grimace and facial contortion of the men who so relentlessly sculpt every little facet of their body in their quest for physical perfection. The adversarial nature of the contests still promotes a spirit of good sportsmanship and camaraderie amongst those who take apart even Schwarzenegger…except when faced with the prospect of losing. This prompts him to openly disparage other competitors, talk about psyching them out and even dismiss his own training partner as “a child”. It’s moments like this that make it easy to see why he was later cast as a ruthless, emotionless killing machine.

For Arnie aficionados, Pumping Iron is the seminal, definitive chronicle of the man himself. Here is someone who adheres thoroughly to the old quote about the man who fell in love himself at an early age and has been faithful ever since. Possibly more career defining than any of the starring roles he has since gone onto, here, at last, is the real Schwarzenegger. Arrogant yet candid. Confident yet vulnerable. Bullying yet selfless. Driven yet laidback. Inspirational yet cold. It places him in his natural environment and just lets him be himself and exhibit the kind of cocky and assured persona that would serve him so well on the slick, slippery slopes of politics and Hollywood. I will leave the final word to the great man himself and the analogy he makes between sex and working out. “It’s as satisfying to me as cumming is”. Arnie…you’re not doing it right.

I am a contributor of questionable taste, origin and talent. My one claim to fame is that I was born in the same hospital as Cliff Richard. I am still in possession of my soul unlike Sir Cliff who sold his to Samael the Desolate in return for eternal youth and the friendship of Sue Barker.

View all posts by Ash Isaac →