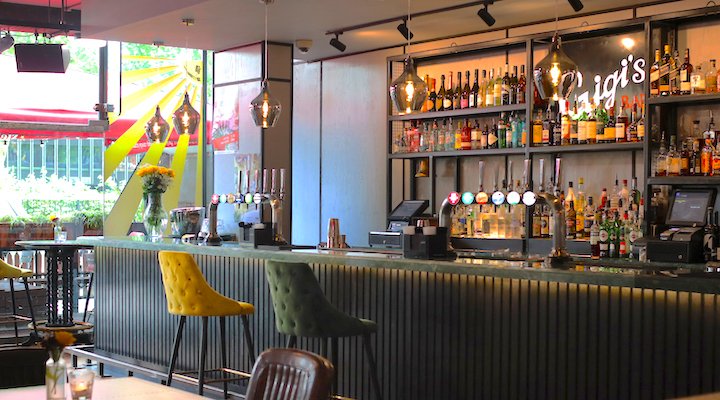 On the periphery of Old Street’s tech hub is London’s hotchpotch area of Hoxton, where dilapidated dwellings intermingle with foodie and drink hotspots. One side of Hoxton Square sees the arrival of new addition, Gigi’s Hoxton, an all-day restaurant, bar and late night music venue. Gigi’s has taken over the former site of Zigfrid von Underbelly, and hopes to fuse design, contemporary food, cocktails with DJ sets and live music. We at Vada Magazine popped in to find out how this new takeover is taking off.

The venue appears still very much music-focussed with food a second priority, as downstairs remains Hoxton Underbelly, a continuation of one of East London’s most popular live venues and an important creative hub in the area’s thriving music scene. Back upstairs, Gigi’s design is meant to reflect the personal style of the owner, and whilst areas work well individually, like the bar with a Wasabi-green colour stone counter, and separately the wooden tables and chairs that look like they’ve been reclaimed from 1950’s American cars. However, put together and combined with the artwork and sculptures, the interior left us confused, perhaps a reflection of the hotchpotch of Hoxton.

The 250-people size venue has both indoor and outdoor space, so on a clear afternoon dining al-fresco is a welcome option. Onto Head Chef, Antonio Mollo’s menu. We tried all three courses with a bottle of wine to share.

We started with the an Italian Burrata (£8) with heritage tomatoes, carasau bread (traditional Sardinian bread like a popadom), and basil oil, and Pan fried scallops (£9.50) with lemon ricotta cheese, crispy leeks, and sweet chilli pepper cream. The former was deliciously creamy, yet the tomatoes were as crunchy as apples, and in our opinion could have spent another day on a sunny window ledge. The scallops were succulent, absorbing the chilli flavour well, and overall a balanced dish.

Main course was grilled beef fillet (£22.50) served with roasted Tropea onions, artichoke, Italian polenta and rosemary gravy, and a Grilled tuna steak (£17.50) covered with poppy seeds, and served with a chicory, rocket, blood orange and fennel salad. Here the menu description did not match the food, with banana shallots rather than Tropena onions, and a stick of rosemary rather than a rosemary jus. This in itself is OK if the menu is accurate, but a much more liquid and flavoursome polenta would have brought balance to an otherwise dry dish. The tuna steak was well-designed option perfect for summer dining, but the fish in our case was overcooked.

We enjoyed these with a bottle of Los Vinateros Rioja Crianza (£27.95), a light and very pleasant red-wine that we were glad to see on the menu, perfect to pair with a summer afternoon lunch.

For desserts, we were perturbed by the thought of first item on the menu: vodka lemon tiramisu – we are unsure how those flavours could compliment the tiramisu combination of coffee, Tia Maria and cocoa. Instead we opted for the chilli vanilla panna cotta (£4.50) and Strawberry cheesecake (£4.50). Unfortunately the panna cotta was overcooked and had a fierce savoury chilli sauce, not flecked with chilli flavour as we had expected. The cheesecake was less cheesecake, more sponge-and-mouse (i.e. a lot softer), but light and nonetheless moreish. 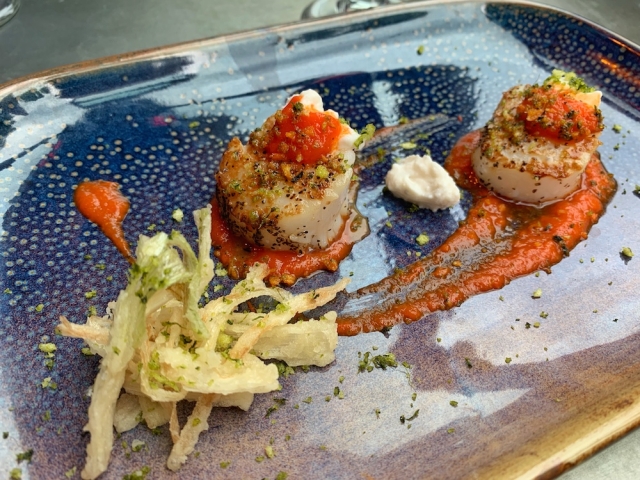 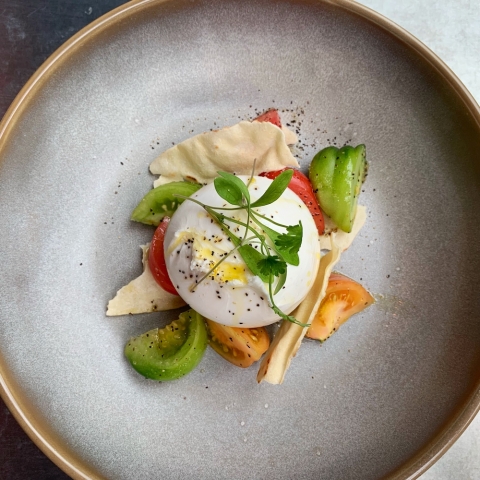 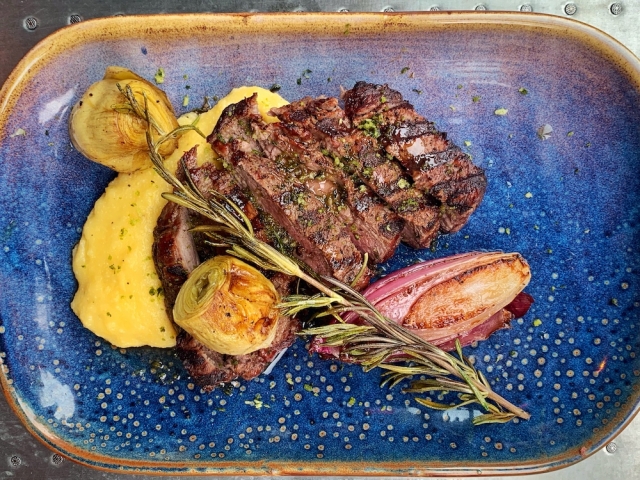 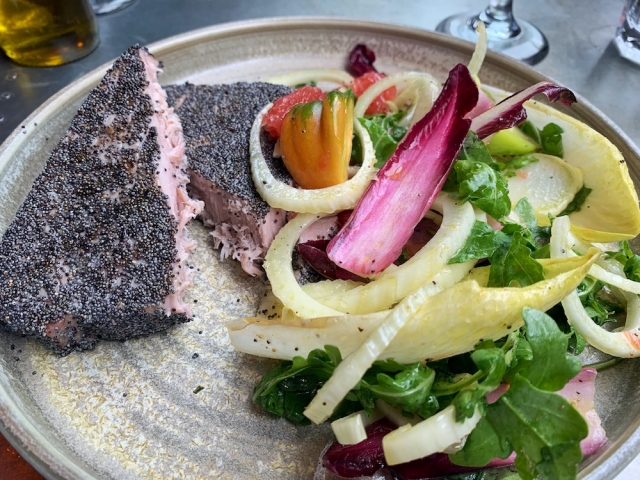 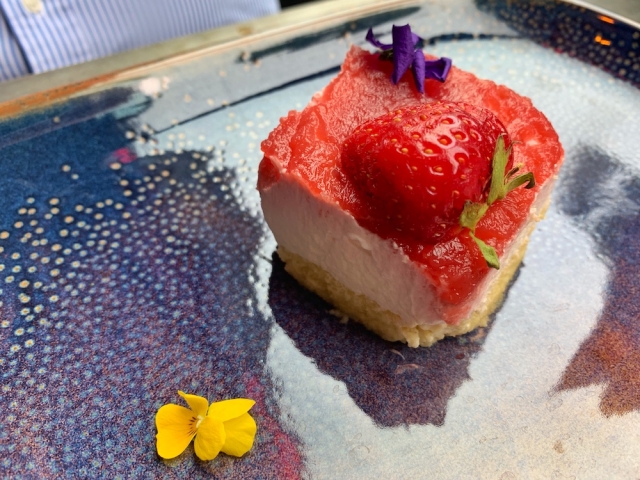 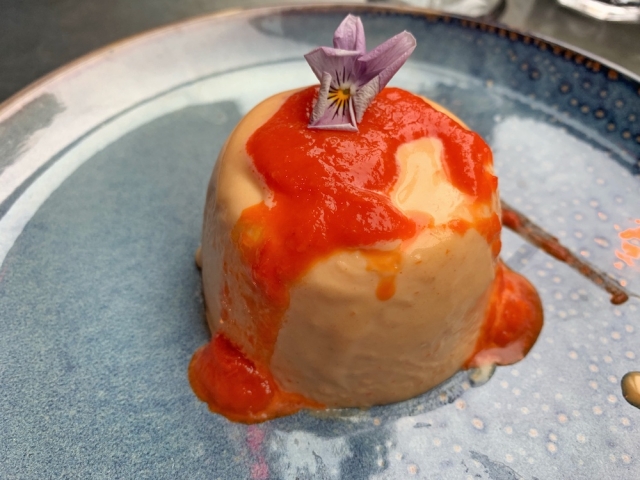 Gigi’s Hoxton has a clear focus on music, and has potential to continue to be a success in this respect. However as part of a family of 4 venues across east London, stretching one Head Chef across all kitchens has impacted the execution of the menu (which on paper is good), which started strong but  waned with each course. We would be happy to go back and dine again once this staffing issue has been resolved, as the menu does describe a delicious selection. Otherwise if in Hoxton, this is the perfect spot over the summer to chill with a glass of wine or cocktail by the square.