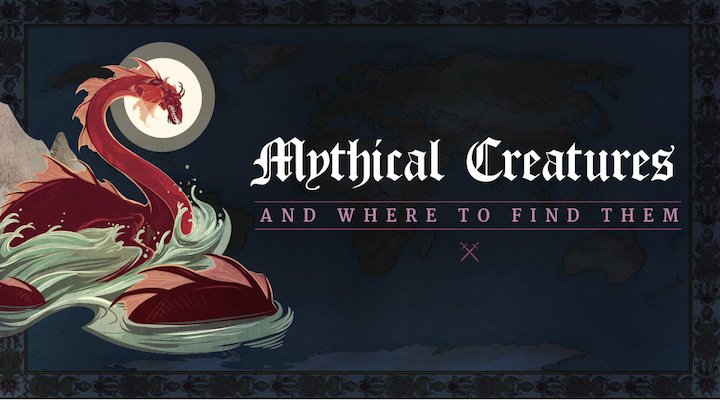 This guide is a go-to source for travellers who would like to ditch the predictable travel destinations and try something a little more exciting. Expedia have created a resourceful Map on Mythical Creatures Around The World And Where To Find Them. Whether you are planning to hit the vampire trail in Romania or track Bigfoot in Oregon, this map is your best source for planning your trip. The guide features a key information on:

We at Vada preview what you can expect to find on the Map of Mythical Creatures around the World.

Where to find Bigfoot

Bigfoot, Sasquatch – or whatever you want to call the enigmatic man-ape – has been regularly sighted across North America for the last 200 years, although the oldest account of Bigfoot dates all the way back to 986 AD. Despite the frequent sightings, scientists tend to dismiss its existence, claiming it to be merely part folklore, part misidentification and part myth.

If you find yourself in Oregon, the good news is that the region is known for its reported Bigfoot sightings, so much so in fact that Oregon Route 224, which heads south-east from Portland into the Cascades mountain range, has been coined the Oregon Bigfoot Highway.

Where to find Skin-Walkers

Beyond the natural splendour of the Mountain State of Colorado lurk some very spooky myths and legends. These tales are founded on the stories of the indigenous Navajo population which has lived along the Colorado and Little Colorado Rivers for centuries.

Located at the convergence of the Solimões and Negro Rivers as they meet to form the mighty Amazon, the city of Manaus in north-western Brazil is the natural starting point for myth lovers on the trail of the Yacumama or “Mother of the Water”, a legendary giant snake.

Where to find the Loch Ness Monster

One of the definitive and iconic mysteries of British folklore, the Loch Ness Monster – known affectionately as ‘Nessie’ – has been sought by adventurous travellers to the Scottish Highlands for almost a century.

Where to find dragons

The red dragon has played such an important part in Welsh folklore that it enjoys pride of place on the country’s flag. But why are Welsh identity and the idea of the dragon so inextricably linked? Did these creatures once roam the Welsh hills, breathing fire and occasionally breaking out into a chorus of “Mae Hen Wlad Fy Nhadau (Land of my Fathers)” as they went?

Where to find vampires

Not sure what to do in Romania? Well, if you’re feeling brave, you could always take a trip to Transylvania, best known as the mysterious land where bloodthirsty vampires and howling wolves roam.

Many people think Transylvania is a fictional place, but this mountainous area in central Romania is very real, and also extremely picturesque. So, if you do ever emerge from “the land beyond the forest”, you should have some pretty good snaps to show for your trip.

Where to find a phoenix

One of the most well-known mythical creatures is the phoenix, often referred to as the Firebird. It comes from Greek mythology, a rich and diverse collection of stories and teachings on everything from Greek gods and heroes to the nature of the world. The golden-feathered phoenix was so bright it was said to shine with pure sunlight, and its blue-, green- and purple-feathered tail was so dazzling it would transfix its admirers. The bird, perhaps most famously, was said to be reborn by arising from the ashes of its predecessors, giving rise to the phrase ‘phoenix from the flames’.

Where to find a Ninki-Nanka

Reportedly sporting the body of a crocodile, the head of a three-horned horse and the neck of a giraffe, coming face-to-face with the Ninki-Nanka may not be at the top of everyone’s list of Africa sightseeing essentials. But for those who love the local folklore and the amazing natural world which both lines and lives in the Gambia River, trailing this mythical creature is a wonderful way to begin exploring this fascinating corner of West Africa.

Southern Africa’s impundulu, also known as the “lightning bird” as it’s thought to trigger storms, is a fascinating mythological creature which stems from the folklore of the Zulu people among others. If you’re wondering what to do in Cape Town, following the trail of this amazing mythical creature is one way to uncover some of the cultural and natural richness of this beautiful corner of southern Africa.

Where to Find Ningen

The main metropolis of Chile’s southernmost tip, Punta Arenas (“Sandy Point”) is the perfect base from which to begin your search for the elusive ningen – humanoid sea creatures – said to inhabit the waters of the Antarctic.
Taking a boat tour through the cold waters which surround this remarkably friendly and relaxed city is an essential part of any stay here – even if you’re more interested in the area’s local penguin population than its more other-worldly underwater inhabitants. From breath-taking views and breweries, to museums and nearby islands, there are plenty of amazing places to visit in Puntas Arenas, when you’re not tracking the mysterious ningen.

Where to find a Yeti

If you find yourself looking for places to visit in Nepal and are in the mood for an adventure, few purportedly mythical creatures have caused quite as much controversy over the years as the yeti. While animals like the phoenix and the Welsh dragon are now generally accepted as pure myth, the existence of the yeti, or abominable snowman, is one of the world’s greatest enduring mysteries.

Where to find a unicorn

If you’ve booked the trip of a lifetime to China, then with nearly 10 million km2 to cover and more than 14,000km of coastline, you’d be wise to plan exactly what you want to do before you go. Due to its sheer size alone, this probably isn’t the place for spontaneity, but that doesn’t mean your trip to China won’t include plenty of magic of its own. And what can be more magical than following in the hoof prints of the mythical unicorn?

Unicorns have played a central part in Chinese mythology since the first references were made to a creature called the qilin in the 5th century BC. Since then, this mysterious single-horned creature has made appearances in a number of Chinese works of history and fiction, with one Emperor even claiming to have caught a live qilin in 122 BC. So, if you’re not sure what to do in China, why not spend some time learning more about this intriguing mythical creature?

Where to find a Kappa

Just as children in Britain have been brought up with stories of the Loch Ness Monster, those in Japan will have learnt all about the kappa – a mythical water goblin that forms an integral part of Japanese folklore.

As with many mythical creatures around the world, the kappa, translated as “river child” or “water sprite”, doesn’t always look exactly the same. However, if you encounter a reptilian creature about the size of a large monkey, which has humanoid arms, walks upright and is green or bluish in colour, you’ve probably run into a kappa.

Where to find a Bunyip

Fancy a journey deep into Australia’s history and its astonishing landscapes? Why not follow the trail of the mythical bunyip (water monster) back to its Aboriginal origins in the south-eastern territory of Victoria.

Where to find Drop Bears

Some people claim that the drop bear is a tall tale created to scare gullible tourists who visit Australia. But with some truly fearsome creatures already in existence in the bush, outback and deserts of Australia, is a man-eating, tree-dwelling bear really so unbelievable? And are you willing to take the risk?

To discover more about the Map on Mythical Creatures Around The World And Where To Find Them and what else there is to visit at their destinations, visit expedia.co.uk.