The UK braces itself next month, as out-of-this-world San Fran drag superstar Peaches Christ returns to our shores. Following her infamous debut at Cornerhouse back in 2010, Peaches will be landing her space shuttle to celebrate camp 1968 science fiction flick Barbarella (directed by Roger Vadim).

Peaches Christ will be inviting her audience to an immersive, interactive pre-show parody, ‘Bearbarella’, which will run for 50 minutes before the screening of this iconic film of big guns and big boobs. She will star alongside fellow San Francisco drag queen Lady Bear, who will take the title role as a plus-sized queen tasked with saving the Queerniverse from a wicked, knife wielding villain played by Peaches herself. They will be joined by Hugz Bunny and Shemantha, plus UK performers the Ultra Violets, and the founders of Manchester’s Cha Cha Boudoir, Cheddar Gawjus and Anna Phylactic.

In a special twist, the audience is invited to dress up their best Barbarella-inspired frocks in preparation for the Orgasmatron Challenge. For the challenge, Peaches will invite the best-dressed people in the crowd onstage for their chance to be publicly pleasured on the Orgasmatron.

This event is part of the nationwide BFI science fiction season Days of Fear and Wonder and is supported by Film Hub NWC. 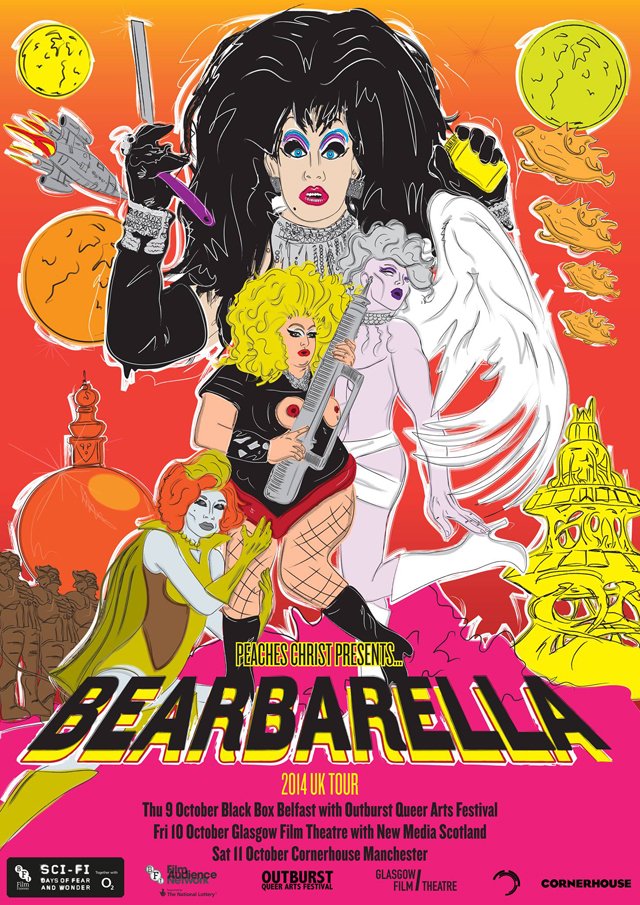 One thought on “Peaches Christ brings Bearbarella to the UK”