Late last year we reviewed the play Would You Change by Bewilderbeastly Productions. Last month the show took to the stage at The King’s Arms in Salford, with a new cast and tweaked script. The final showing of the play will take place in Bar Pop on Canal Street in two weeks.

We were lucky enough to check out the new version of the play with friends in its new location away from the Village. It’s always a good sign when people leave the Village to attend LGBT events, as it shows the willingness of its audience to try new things.

The Salford venue meant a bigger performance space, with the audience arranged in two rows on either side of the performers. The performance, taking place in the round, made greater use of the space and added an extra level of vitality to the show.

I won’t go over the plot too much again, as you can read all about that in my first review. Suffice it to say that Quentin Crisp, Gladys Bentley, Harvey Milk and Sappho all end up in a room – where they can change the universe by changing just one thing in their own lives.

Would You Change is still very much a dialogue-driven show. Indeed, if anything, it feels wordier than it did last time. There’s certainly more being said, and though there’s more movement, there isn’t always the feeling of more action. As a piece intentionally written to provoke thought, this isn’t too much of a problem – the dynamic between the actors is good, and the conversational tone works rather like a radio drama. This is soap-opera stuff with a thin veneer of science fiction, and that’s absolutely fine. One does wonder how the show might have worked if the characters had been allowed the space of the dramatic monologue to explore their individual stories more – rather than the realism of grilling each other in an almost Q&A format – but the pace flows relatively quickly and we learn enough about the characters to be on their side throughout.

At times there’s a bit too much retreading old ground – such as Sappho, who still very much drives the forward momentum by asking lots of questions – but this is mostly okay, except when it comes to Tint. In the first version of the show, Tint was played by two characters, and in this iteration is played by just one. However, the character has inexplicably developed a taste for awful animal-print clothes, which only makes visible many of the reasons the audience reacted coldly to the character – it’s patently ridiculous and stands in stark contrast to the relative realism of the remaining personalities onstage.

Christopher Bowles does as best he can with the Tint character, but after seeing the show a second time, my opinion about the character itself has solidified. From an audience perspective, the character is unnecessarily intrusive, rambles on about abstract science fiction concepts that are much easier to understand than we’re given credit for, and frankly doesn’t need to appear for more than a few moments at the beginning and then the end of the play. Given a bit of a rethink, the show could probably get rid of the Tint character altogether, and it would be stronger for it. Sorry, Chris – it’s nothing personal!

The cast is also slightly different: Sappho is now played by Kelly Efthymiou and Andrew Husband plays Quentin Crisp. I’ll admit to being very fond of the old iteration of Crisp, and Husband does a great job too, but in this version of the play he seems less comfortable in the role. Because he has so many of the big, dramatic lines, there’s a lot of pressure on the actor and, unfortunately, in the performance I saw he fluffed his lines a little.

Kelly Efthymiou, meanwhile, was a far more authentic Sappho. She also did a great job of helping Husband when he went off-course at the beginning, but sadly her enunciation, combined with her fast-speaking Greek accent, meant that some of her lines were lost. Again, this might have been a result of stress, and given a longer run, we might expect both performers to have settled into their roles better.

Gladys Bentley was still gloriously played by Rebecca Swarray. She was a powerful presence once again, and her outfit was a nice touch, showing a touch more style and flair than before. Although the moment she sings a random line of Nina Simone’s ‘Feelin’ Good’ (written and released decades after Bentley’s death) seemed odd and misjudged. This wasn’t the only anachronism, with characters using Americanisms and slang like ‘bombshell’, despite predating the use of such terms.

Andrew Marsden’s Harvey Milk offered some positivity to the philosophical meandering of the characters, and was played with a degree of intensity that added a counterpoint to the frivolity of Crisp, the moody musicality of Bentley and the lofty questing of Sappho.

Though the focus appears to be on the characters’ lives, and the role each has played in history, the final conclusion is one of the contradictions of our own time. Though Sappho lived millennia before us, she was in some senses freer than the other characters in the play, revealing the puritanical daftness of homophobia in our world – a world that emerged much later and in many senses has regressed. It reminds us, too, of the precariousness of LGBT rights, and that the fight is never quite over.

Though this time round I enjoyed the experience less than I did the first time, I’m in the difficult position of judging two different takes on the same script. Despite these criticisms, however, I did enjoy the show more than my critique might suggest. I feel strongly that Would You Change is a great tool for education, and would make for an excellent piece to tour schools. I’m a strong believer in the ideas and concepts it embodies, and feel confident that with proper funding and more time to work on the production, it could really become something special.

An excerpt of the play, which reads exceptionally well on the page, has already been published in SPOKE: New Queer Voices, and I look forward to seeing what comes next from writer Rylan Cavell.

The final performance of this current production of Would You Change takes place at Bar Pop on Canal Street on 26 March. The money raised from the event will go towards a filmed version, which will be made by Hardy Productions, a Manchester-based and LGBT-run small-scale film production company. The film, with support from Queer We Are and Queerchester will be tour film events around the country as an educational and entertaining piece of cinema.

In August a spiritual ‘sequel’ of Would You Change will appear as part of the Manchester Pride Fringe. The Fey looks at a possible dystopian future from the viewpoint of its LGBT characters – a future that might occur if contemporary far-right parties were to gain power. While Would You Change celebrates the past, The Fey warns us not to be complacent about how good the future is going to be. It is a stage version of the film of the same name by Ben Turner (Haus of Phag). The play aims to take the focussed message of the film, and present it in a new and dynamic way. 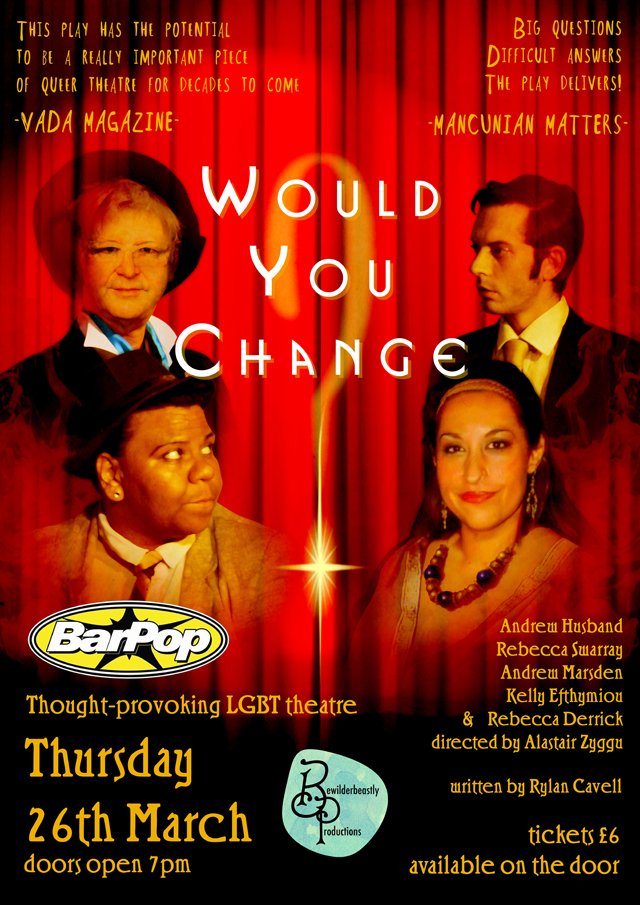