Alexander McQueen has become an icon in fashion history for his unrivalled creativity and his balls to do things that other designers could never dream of getting away with. For anyone interested in his work, you will get a chance to see some of his legendary creations in the flesh, because the record breaking Alexander McQueen: Savage Beauty exhibition is coming to London next spring.

The work of one of the greatest designers ever is coming home after being shown at the Met in New York in 2011, and since the ticket office opened last Friday, I’ve had to work enormously hard to suppress my sheer euphoria at the fact that after four hours, I managed to score a ticket. To celebrate the news that this incredible exhibition is coming to London, I wanted to take a look back over the work of this legendary man.

One of the first memorable moments of his career was in the show for his Spring/Summer 1999 collection, No. 13. The finale featured model Shalom Harlow stepping out in a belted white dress and standing on a turnstile in the middle of the runway. Two robot arms, which apparently took weeks to program, came to life and aggressively spray painted her. Harlow said in an interview that is featured in the McQueen exhibit talks about how “my relationship with them shifted at that moment because I started to lose control over my own experience, and they were taking over. So they began to spray and paint and create this futuristic design on this very simple dress.” She also mentions how “it almost became this like aggressive sexual experience in some way. And I think that this moment really encapsulates, in a way, how Alexander related to creation.” He was an intensely creative man, but also an intensely troubled one who saw life as being darkly linked with sexuality on a fundamental level.

2001 saw his hugely famous VOSS collection, one of his most memorable to date, and most of the dresses are featured in the exhibition today. It was beautifully thought out and expertly executed for maximum impact. The throng of editors, photographers and guests were kept waiting an hour before the show began, during which they were presented with a huge mirrored enclosure, forcing them to look at themselves for the entirety of the time. Reports said that those in attendance were highly uncomfortable with this because after a day of running between shows, they were not exactly looking their best – indeed, McQueen was quoted at the time as saying “Ha! I was really pleased about that. I was looking at it on the monitor, watching everyone trying not to look at themselves. It was a great thing to do in the fashion industry—turn it back on them!” 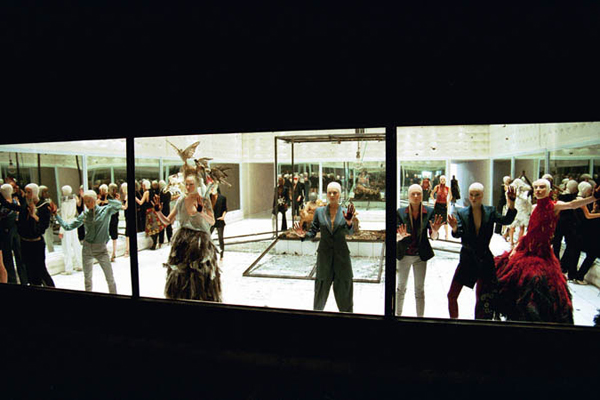 When the show started, the mirror reversed so that the audience could see into the runway but the models could not see out. It was designed to be reminiscent of an asylum, with models wearing surgical head bandages, and the audience sat and watched as the models walked out with deranged expressions – it was a case of the audience watching the models watching themselves.

At the time of his death, he was already working on another collection to be presented at fashion week that Autumn/Winter 2010-11 season, but sadly he never lived to see it on the runway. He cut every single incredible outfit on the body of a mannequin – an incredible skill that required no complex pattern drafting – and, as Dolly Jones from Vogue put it: “For all its melancholy and great sadness, this show was absolutely McQueen… Every piece was exquisite.” Each look was reportedly only 80% finished, but the collection was still the jewel in the crown of that fashion month.

The Byzantine-inspired dresses and coats were created in the most sumptuous red and gold shades and created from silk, chiffon, fathers and leather – all absolute McQueen staples. It was a poignant moment when there was no McQueen present to take his final bow, and Alexandra Shulman, Editor-in-Chief of British Vogue summed up the mood of the fashion world perfectly when she said “it was a wonderful effort on the part of the McQueen team to put together a sort-of perfect tribute to [him]” and was equally reluctant to say with certainty if there could ever be anyone who could take over the reigns of the McQueen brand after his death.

Thankfully, there was. Sarah Burton has been the best possible person to succeed McQueen’s leadership, and although she may never be able to match him for shock factor or for raw emotional content, she has certainly proved herself an incredibly capable designer and successor.You can’t really sum him up in a word or a sentence; the best you can do is to go and see Savage Beauty for yourself and see first hand some of his astonishing creations and then hopefully, you’ll fall as in love with him and his work as I am.

Vada is recruiting new fashion writers to join our team! If you’ve got a sharp wit and an eye for style, get in touch, we’d love to hear from you. Email our fashion editor at elliotrose@vadamagzine.com and tell us why you want to join us. Good luck! xo