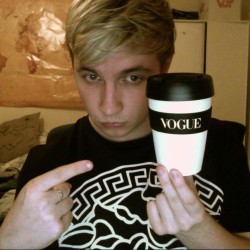 Jack Purser
A 20 year old Bristol based disasterpiece.He was once complimented by Donatella Versace who said his jacket was ‘Good Fashion’ and Erin O’Connor also trod on his foot after rejecting his offer of a selfie at Vogue Festival. Since that baptism by fire, fashion has been his passion.

Since the arrival of Norma Jean to the silver screen, blondes have been iconic in the world of fashion, film and celebrity. Not only did women seek to emulate the beauty and charisma of Monroe, Jayne Mansfield, and Marlene Dietrich – so have the boys! Starting in 1933, the term ‘Blonde Bombshell’ was granted to Jean Harlow for role in the aptly named ‘Bombshell’ – Her striking blonde hair and whimsical, flirty persona was considered ground-breaking and daring in the 30s.

Throughout time, blondes have gained themselves both adoration and infamy… the moniker of the ‘Dumb blonde’ has stuck with many male and female movie stars. Marilyn Monroe and Jayne Mansfield were type-cast throughout their careers as the dumb, ditsy blonde who knew no better when in fact; Jayne Mansfield spoke 5 languages – including English, Spanish and German & was also rumoured to have an IQ of 163.  Although Jayne sadly never shook this stigma, she made a fortune from it.

From the 1950’s onwards, busty blondes were seen as sex icons – Their seeming lack of intelligence meant that blonde starlets were often cast in comedic and sexual roles. Monroe and Mansfield’s fuller figures, large breasts and seemingly loose morals were very popular with men in the era and are still celebrated to this very day.

Many male models have taken to bleaching their hair in order to define their look. Luke Worrall bleached his hair and led the 2008 Menswear campaign for Vivienne Westwood (And looked damn good doing it!)

It doesn’t just stop with modelling. Countless male actors have bleached their hair for film roles – Some examples of this include – Jared Leto for Fight Club, Chris Hemsworth for Thor and lest we forget… Tom Felton as Draco Malfoy!

Blonde hair has remained a strong staple in the fashion industry – and it is showing no signs of going away, which personally, I’m glad about! So, do blondes have more fun? Jayne certainly had a laugh.

A 20 year old Bristol based disasterpiece. He was once complimented by Donatella Versace who said his jacket was ‘Good Fashion’ and Erin O’Connor also trod on his foot after rejecting his offer of a selfie at Vogue Festival. Since that baptism by fire, fashion has been his passion.

View all posts by Jack Purser →