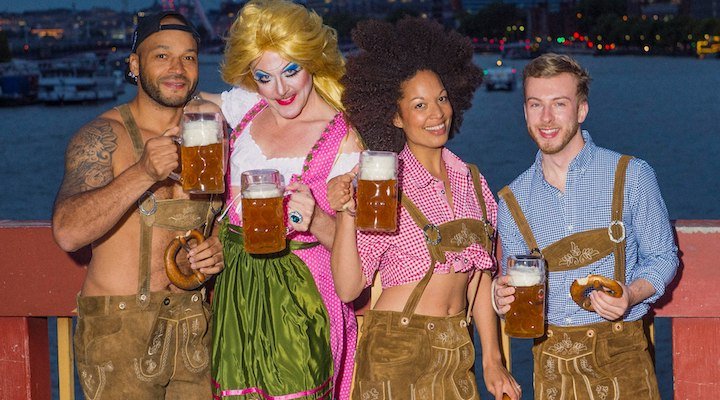 Pink Oktoberfest, is a one-off LGBT themed takeover event in London that will see drag queens in lederhosen competing in lip sync battles, game shows and rave karaoke with dancing on tables, congas, dress up and much more.

The traditional Bavarian beer hall which will also have a fun fair will be situated near the O2 Arena in London’s Greenwich Peninsula. The exterior will be purpose built to look like the outside of a traditional 19th century Bavarian beer hall. Inside there will be over 220 bench tables, set in a huge open-plan beer hall made from wooden floors and walls. The interior will be decorated with floral garlands, a traditional blue and white striped roof, and a live music stage for entertainment. With similar takeovers, already popular in Munich and Dublin, those attending can still expect lots of German waiters, German sausage and innuendo thereof.

Rebecca Paisis, founder of Pink Oktoberfest is excited to be taking over London’s largest and most authentic Oktoberfest event for the LGBT community and its allies. The Pink Oktoberfest will be a premium event which will look and feel just like the original but with an LGBT twist. The entire site for the Pink Oktoberfest will be on a beautiful 16,700 square foot area over-looking the Thames opposite Canary Wharf, and is less than a five-minute walk from North Greenwich underground station. It will include a full-scale German fun fair with high-flyers, huge jumbo slides, a giant Ferris wheel and an outdoor beer garden with genuine wooden Alpine huts, transported from Germany for the month long event.  There will be food stalls selling traditional Bavarian cuisine including Haxn (pork knuckles), Leberkas (beef/pork loaf), Sauerkraut, and of course the world-famous Bratwurst sausages.

Inside, the beer hall will have capacity for 3,000 people and the outdoor space will accommodate another 2,000. The organisers are shipping over 250,000 pints of premium “Erdinger Weissbier” (wheat beer) and an award-winning lager “Fischers Hell”, direct from their brewery in Bavaria, there will also be wine and spirits on sale.

Live entertainment will be provided by LGBT artists and DJs, which will run through the evening. Even waiters and waitresses from the LGBT community will be brought in to serve guests and to carry up to 10 steins of beer at one time. We at Vada appreciate a man who can handle several steins at once.

Expect waitresses to be serving the beers decked out in traditional Dirndl dresses, with a laced up bodices, white blouses, with full skirts and aprons. Male staff will be kitted out in genuine lederhosen breeches, alpine hats and socks up to the knee. And for those with a fetish for this traditional clothing, there will be shops on the site to buy traditional German clothing to wear and souvenirs from the day.

Early bird tickets have sold out, but more tickets priced from £17.25 (including booking fee) are available online. For bookings go to pinkoktoberfest.com.