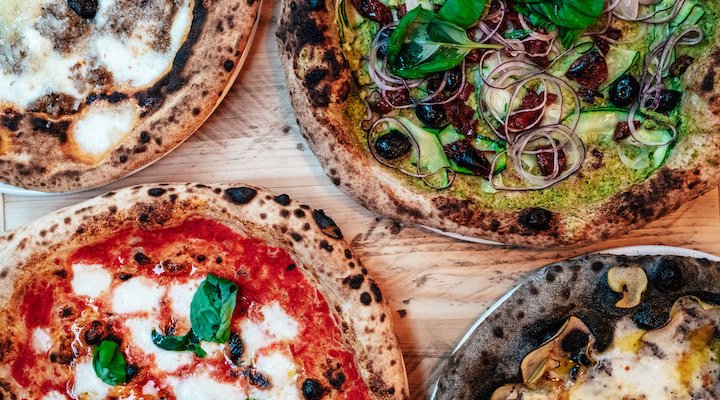 Pizzeria Zia Lucia opened its fourth site in Aldgate East earlier this year, bring its neighbourhood vibe and good value pizzas within easy access of city workers. Two years ago Vada tried out the then just-opened Hammersmith branch (the second after Islington), and are keen to see what’s consistent and whether this pizzeria is still value for money.

Located, a five-minute walk from Aldgate East tube station, the latest Zia Lucia site is within a recent development. Contrasting against the modern exterior, Zia Lucia has attempted to infuse some of the charm of aunty Lucia, with a huge wooden pizza oven imported from Naples on display in the open kitchen, and a colourfully tiled bar area. Whichever of the 60 covers guests are seated at, they will have a clear view of pizza in the making.

On arrival we were were seated immediately and the restaurant shortly after filled up to capacity, which meant, with what appeared to be only one waiter working, service was slow. He did however prioritise getting hot food to tables on time, so when our pizzas did arrive they were fresh from the oven.

The menu layout has stayed the same structure as other branches: choose from one of four bases (traditional, wholemeal, gluten-free or charcoal), and then choose from a selection of predefined toppings.

We started with bread and a single dish of burrata (£5.50) to share, thinking this would save room for dessert (oh how wrong we were). Naturally, a couple of glasses of Merlot (at a reasonable £5.50 per glass) were in order, this being a Thursday night, and an Italian restaurant – Italian soft drinks are also available.

After devouring the starter of tasty Italian carbs and cheese, we prepared for the main course of carbs and cheese. We chose the Arianna pizza on traditional base, made with mozzarella, sausage, Taleggio goat cheese, pecorino cheese, truffle honey (£11.95), and another Arianna on vegetable charcoal, this time without sausage (£11.95). Both bases were light with just the right amount of chew and crispiness. We did struggle to finish both pizzas however, the amount of umami flavours from pecorino and truffle were delicious but intense.

We had no room for dessert, but noted the same ‘pizza dessert’ and ‘homemade tiramisu’ options are on the menu, as in the Hammersmith branch.

Though we found service slow at peak time, this is an easily resolvable issue with another waiter. The immense pizza oven remains just as much as a focal point in this venue as the Hammersmith branch of Zia Lucia, and the quality of the pizzas is just as high. For both pizza lovers, and those wanting to eat good food on a budget, Zia Lucia will appeal – our total cost would have been £20 per person. We recommend going with an empty stomach as generous portions mean diners always leave full.

For more information, and to book, visit zialucia.com