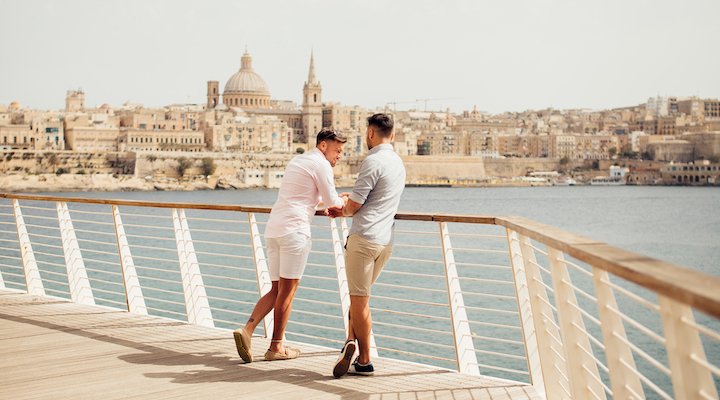 Malta is the number one LGBT destination according to the European Rainbow Index (scoring 94%), owing to the population’s respect for human rights and full equality in society. Combined with history, culture and temples dating back over 7,000 years, and 3,000 hours of sunshine every year, Malta is therefore an ideal weekend-break.

At Vada we explore three things to do in Malta during a weekend-break: to see the many film locations, the Valletta tour (as the European Capital of Culture for 2018), and the fact that the country will have plastic-free oceans by 2019 meaning all beaches are clean.

The striking coastline and historical sites of the Maltese islands, mean they has A-list locations for film locations. A new Film Trail allows visitors can use a location guide to see the settings of a plethora of Hollywood highlights in the archipelago.

Game of Thrones (season one) was filmed at inland villages for a number of dramatic scenes, including the farewell between Catelyn and Ned Stark. Boasting a maze of tangled streets built in brilliantly golden limestone, the town of Mdina is a favourite with film directors looking for a medieval-looking location.

RELATED ARTICLE  5 alternative LGBT friendly cities in the US

Fort Riscoli, located at the South Entrance to the grand harbour at Valletta on Malta, was a major location for the setting of the films Troy and Gladiator. Whilst the Fort is dilapidated, it has been a key setting for much of Malta’s history.

Brad Pitt and Angelina Jolie’s By the Sea (2015) was filmed in Gozo, due to its lovely winding roads and is home to the island’s oldest village, “Gharb”.

Let’s also not forget the location for Swept Away starring Madonna which was also filmed in Malta – though you can be forgiven for forgetting some of the tragic acting.

The film trail map is available at maltauk.com/filmtrail for visitors wanting to explore these locations and more.

Valletta is the European Capital of Culture 2018, and one of the ways it celebrates this is with the Valletta Trail, which showcases the culture and history of the island’s capital. Valletta has an abundance of elegant 16th century architecture, museums, restored fortresses and an opera house. The picturesque walled city packs a cultural punch with more than 6,000 years of history jammed into just 314 square km, making it one of the most culturally saturated cities in the world.

Malta is set to become the first plastic-free ocean country in 2019. Recognised by White Flag International, Malta is set to become the world’s leading environmental ocean tourism destination by March 2019. The White Flag certification confirms that the beach and surrounding area is free from plastic and non-degradable waste. The work towards the certification is already in process and so far, more than five beaches have been cleared by White Flag International divers and inspectors. After more than 12 months of operations along the coastline with the aim of protecting Malta’s marine wildlife and impressive bird population, and also guarantees beautiful beaches.

Whilst looking forward to 2019, visitors can expect:

For more inspiration of what to do when visiting Malta, visit maltauk.com.