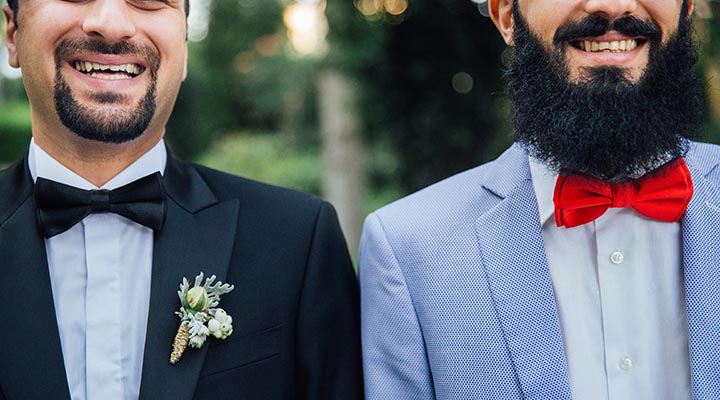 I never dreamed about a white wedding as a little girl – until the Civil Partnership Act was introduced in the UK in 2004. I started having fantasies about veils, dresses and blushing brides. Two blushing brides. Civil partnerships gave me hope that by the time I might want to commit myself to one person forever, people wouldn’t consider it better, more serious, if that person were a man than if they were a woman.

But my sudden interest in three-tiered wedding cakes betrayed disappointment as well as hope. Why give us marriage in everything but name? It felt like an act of cowardice on the part of the government: full equality was a step too far. Separate but equal.

On 1 October 2014, Rebecca Steinfeld and Charles Keidan tried to register for a civil partnership. They wanted the ‘greater legal rights and responsibilities [of marriage] without the social expectations, pressures and traditions surrounding [it]’. They were refused, as expected, and are now running a campaign to introduce civil partnerships for opposite-sex couples like themselves, and have brought a case in the High Court.

Reactions have been mixed: most of the comments on their article explaining this decision in The Guardian deride Rebecca and Charles for pickiness or pretentiousness. Why not just do it quickly down the registry office and call it what you want?

These comments miss the point: whether you like it or not, opposite-sex marriage does still come with a set of expectations that are difficult to escape. To take advantage of many of the legal benefits that marriage provides, you have to declare your marital status. While you may privately refer to that person as your partner, when you are speaking to someone about your tax return, they are your husband or wife.

Marriage is, and always has been, a public, social and legal ratification of private commitment. You cannot just make it mean what you want, without any societal baggage, because that baggage is part of what makes it a marriage. It is also still assumed by many to be an unequal relationship, with the man as the dominant partner. People have actually got angry at me when I’ve told them that I would never change my name on marriage, though I’ve no idea what difference it makes to them.

While I don’t think LGBT people should spend too much time campaigning on behalf of heterosexual rights – and disagree with Robert Wintemute’s call for Stonewall to offer financial support for the ongoing High Court case – we should be interested in this. Not just because civil partnerships were originally meant for same-sex couples, but because it concerns what kinds of relationships we decide, as a society, have value.

Our relationships have traditionally been given less – or no – value. Heterosexual marriage has always been at the top of the hierarchy, with gay relationships only understood if they resemble it. People still ask same-sex couples, ‘Who’s the man and who’s the woman?’

Right now, we have two options: we can either assimilate everyone into the institution of marriage, or recognise the equal validity of different forms of relationship. Why shouldn’t we give people the option of making that important emotional commitment without forcing them to do it in a way they’re not comfortable with, gay or straight?

Extending civil partnerships also gives us the opportunity to consider what kind of institution we want them to be. As it stands, there are very few legal differences between marriages and civil partnerships, and those that there are only stand in favour of marriage. By differentiating them more, we could create something like the French PACS.

Originally introduced as a civil union for same-sex couples in 1999, as of 2012 94% of PACS were between heterosexual couples. A PACS does not confer all the rights of marriage, but it is much more flexible. For example, married couples are automatically entitled to pension and inheritance rights that a couple entering a PACS would have to arrange separately, but dissolving a PACS is much simpler than divorce. No wonder the number of marriages in France is going down while the number of PACS is going up.

Extending civil partnerships to opposite-sex couples offers this country the opportunity to recognise that not everyone shares the same ideals when it comes to relationships, and to create something new that isn’t just marriage’s poor cousin, but a powerful institution in its own right. I hope that whether I get married or have a civil partnership won’t have anything to do with the gender of my partner, but what feels right for the nature of our relationship – whatever feels like the right way to express our love.

View all posts by Bryony Bates →