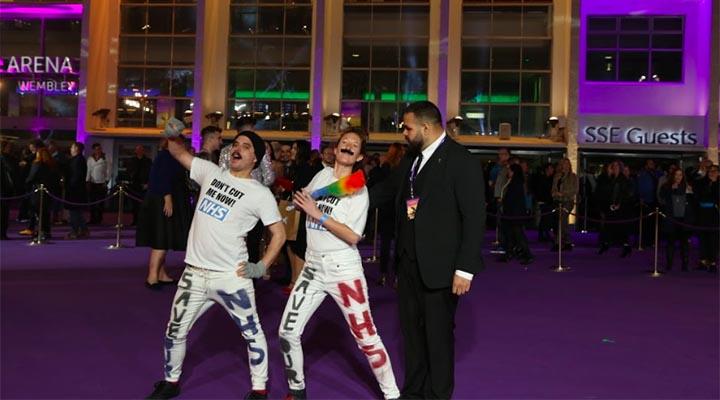 ACT UP joined the NHS Anti-Swindle Team at Wembley SSE Arena to protest at the launch of Freddie Mercury biopic Bohemian Rhapsody.

Protesters chanted, ‘HIV stigma is real life – not just fantasy’ as a response to the whitewashing of Mercury’s HIV. They also sang a revised version of ‘Don’t Stop Me Now’ called ‘Don’t Cut Me Now’ to raise awareness of the NHS’ refusal to invest in PrEP and new hepatitis C drugs.

‘Queen was the soundtrack of my childhood,’ said Hywel ap Dafydd, ACT UP London. ‘Freddie died when I was twelve, it was the first time I heard of AIDS and HIV. I’ve been living with HIV for the past eight years thanks to medication that came too late to safe Freddie and the millions of people who died because of AIDS.’

Speaking of why he was protesting with the NHS Anti-Swindle Team, he said, ‘There’s a drug called PrEP which stops people from catching HIV but the NHS rations it so not everyone who needs it can get it. It’s disgraceful that the NHS denies people this opportunity that neither I nor Freddie had.’

‘Freddie “Killer Queen” Mercury was a migrant who died from AIDS and today HIV+ migrants are some of the most oppressed in the HIV/AIDS community. We are here today to highlight the ongoing crisis,’ said Jeremy Goldstein, also from ACT UP.

‘Farrokh Bulsara was professionally known as Freddie Mercury was born in Zanzibar in 1946. The son of Parsis, he spent most of his childhood at boarding school in India. At seventeen he and his family became refugees fleeing from the Zanzibar revolution,’ Goldstein continued.

‘After an epic career with Queen Freddie sadly died in 1991 his home in Kensington the day after he publicly announced he was living with HIV. We demand that all HIV+ migrants are treated with upmost dignity, that HIV services stop being closed down and an end to all illegal detention of HIV+ migrants.’

‘I am eighteen and I am involved in Act Up London because it is very important for me to fight for our rights,’ said Kenza Simon. ‘As an LGBT woman who was born in a century where AIDS medicine is more accessible for people, I feel lucky but I realize that we still have a lot to do even in 2018. Our aims changed, AIDS not. This is the reason why I want to be dedicated to this struggle. Activism change the world, let’s do this.’

‘The NHS Anti-Swindle Team are celebrating the life of Freddie Mercury, by calling for support for all migrants and to make sure that everyone has access to PREP in the UK,’ explained Ray Malone of the NHS Anti-Swindle Team. ‘In the midst of the biggest refugee crisis since the second world war, our commitment to universal healthcare is more important than ever. The humanitarian principles that the NHS was founded on, that we are all entitled to the same treatment regardless of wealth or background is being eroded by the government’s toxic “hostile environment”. The NHS Anti-Swindle Team call for this government to be held accountable for the present situation and reinstate a publicly run, publicly managed and publicly funded healthcare which is available to everyone.’

‘In the fourth decade of this crisis,’ said Dan Glass, ‘ACT UP London fight to ensure comprehensive and easily accessible treatment for all people, in all countries. This includes not only medications but also mental and social health services as well as housing and economic equality. Here in the UK, we are united with the coalition of activists fighting to keep our National Health Service free, publicly run, and fully funded. In a time of continuing stigma, silence, and isolation, we combat discrimination against and promote the visibility and leadership of those living with HIV and AIDS – including this hugely important biography of our icon Freddie Mercury.’

ACT UP London is a diverse, non-partisan group of individuals united in anger and committed to creative action to end the HIV pandemic. It is part of the global ACT UP network.

The NHS Anti-Swindle Team is ‘a grassroots collective of artists, activists and mischief-makers who use creative civil disobedience to fight for a publicly run NHS and oppose all forms of private company control in the NHS, with a particular interest in the racketeers who are profiteering from ill health’. 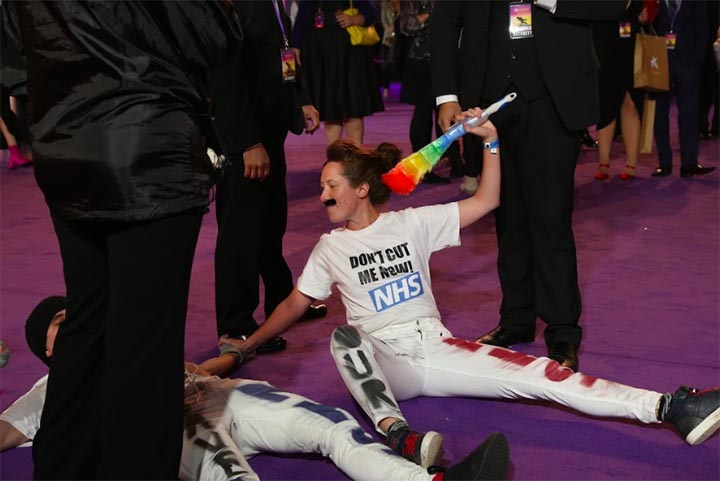 Don’t cut me now
I’m entitled to free healthcare
I don’t pay at all.

Don’t cut me now
If I wanted U.S. healthcare
I’d give Branson a call.